We have nothing to lose, says Udana 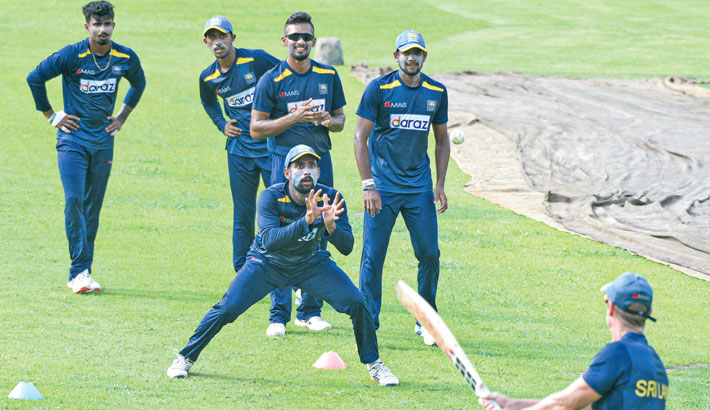 Sri Lankan cricketers attend a fielding practice session at the National Cricket Academy in the capital on Thursday ahead of their three-match ODI series against Bangladesh. – Tanvin Tamim

It was hot and humid in Dhaka on Thursday, 35 degree Celsius to be precise. Visiting Sri Lanka ODI squad seemed well aware that they needed to conquer the heat along with other challenges if they wanted to fulfil their expectations in the upcoming three-match ODI series, slated from May 23.

The islanders opted to come out of their hotel room earlier than their scheduled time and that too escaping all the media as they decided to run at the Sher-e-Bangla National Stadium in the morning to adapt to the condition while following it up with their usual routine preparation in the evening.

Sri Lankan head coach Mickey Arthur spent most of the time making his plans with skipper Kusal Perera while batting coach Grant Flower made sure everyone was on their toes in the fielding session.

Chaminda Vaas is known to be a seasoned campaigner and the bowling coach was seen sharing his experience with a young crop of pace bowlers from the island.

The rigorous fielding sessions in the evening along with batting and bowling looked to have taken their toll on the visitors, though Sri Lankan pace bowling all-rounder Isuru Udana decided to disagree.

“Actually, I don’t think so (heat is a problem) because, in Sri Lanka, it’s hotter than this,” Udana told the reporters at BCB Academy premises.

“The thing is, we’re quite used to the bio-bubble thing now, going forward, we have to stick to those plans, so I think we are ready because we had the five-six days training camp in Colombo. We had a good two sessions in here so I think all the guys are ready,” he added.

Sri Lanka came with a relatively new team as the team management decided to go for young guns instead of their tried and tested and according to Udana that will give them an edge over the hosts as they have nothing to lose and the expectation will be on the shoulder of the host team.

“Actually, to be honest, Bangladesh have a few superstars in their team. But still we have a young side and we have nothing to lose,” said Udana.

“I think we are here to beat them, so we want to give our best to beat those guys, because, in their home, they are very dangerous,” he added.

Udana believed that his experience in the Bangladesh Premier League will help him as he is well aware of the strength and weakness of their opponent.

“I think I have played 3-4 years of BPL (Bangladesh Premier League) here, so I have a bit of experience. On the very day, we have to give our best to beat this team, so that’s the plan,” he said.