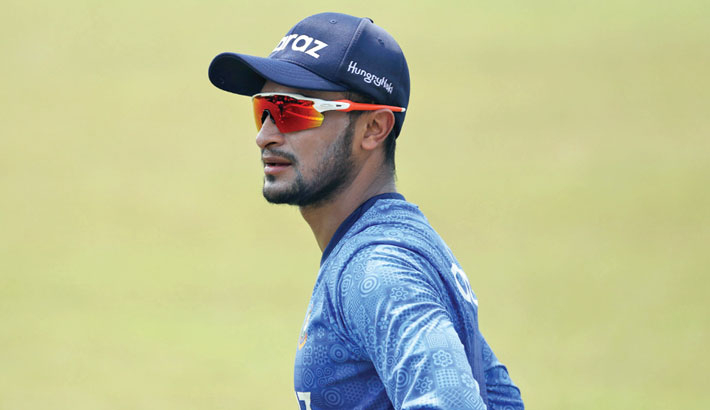 All-rounder Shakib Al Hasan returned to the ODI squad as Bangladesh Cricket Board on Thursday announced a 15-member squad for the opening two games of the upcoming three-match series against Sri Lanka, scheduled to start from May 23.

Shakib missed Bangladesh’s last limited-over series against New Zealand after he was granted paternity leave followed by a thigh injury while he opted not to tour Sri Lanka for a two-match Test series to take part in the Indian Premier League.

Top-order batsman Najmul Hossain lost his place in Bangladesh ODI squad and he is one of the five exclusions from their last white-ball squad that toured New Zealand in March.

Both Mahmud and Rubel are currently recovering from their respective back injuries while Naim Sheikh, who played the T20Is against New Zealand, found himself among the four standby players.

“Najmul didn’t do well in the ODIs so we felt we needed to give him a break as we want him to return with fresh legs,” BCB Chief Selector Minhajul Abedin told The Daily Sun.

Najmul could only score 93 runs in eight ODIs so far, including 38 runs in three innings in the last home ODI series against West Indies. The 22-year old was in the squad for their New Zealand tour but didn't play any of the ODIs.

Bangladesh team, which recalled Imrul Kayes in the 21-member preliminary squad, didn’t pick him for the first two ODIs.

“We picked him in the preliminary squad just to see where he stands and we have done that,” said Minhajul, adding that he is confident that the squad can beat Sri Lanka in the ODI series that is also part of ICC ODI Super League.

“Against West Indies, we won three-nil at home. We didn’t want to make too many changes to keep that consistency. We have kept most of them who played in the previous series at home and we hope we will do well against Sri Lanka,” said Minhajul.

“We have kept four cricketers as standby while given a 15-member squad keeping Covid-19 situation in mind. The four standbys will remain with the team,” he added.

Minhajul claimed that the inclusion of Shakib would be a confidence booster ahead of the series as they suffered immensely without him during the last few series.

“Shakib is our best player and whenever we have him it increases our confidence,” he said.