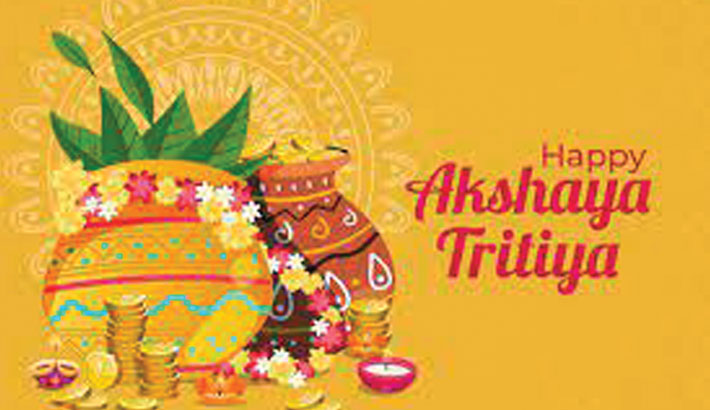 Akshaya Tritiya is a combination of two words (Bengali and Sanskrit). Akshay means something that never decays and tritya means the third day. In Sanskrit, the word Akshay includes prosperity, expectation, joy and success. Importance and sanctity of this day has been acknowledged in different Hindu scriptures. According to the Vedic belief, if any good deed is done on this holy day it becomes eternal. If we do good deeds our gain for it is eternal virtue and for bad deeds eternal sin awaits us. This day destroys sins and gives happiness Again on this day many Bengali businessmen do halkhata. In fact the seller wants to ensure the whole year’s fortunes with some revenue. The buyer also buys something new and seals it for the whole year.

Akshaya Tritiya is an annual spring time festival. It is celebrated on the third tithi (lunar day) of bright fortnight in the month of Baisakh by the Hindus and Jains in India and Nepal. The day is fixed but as Bengali almanac is followed the date is changed in every year.

Apart from these, many significant events in Hindu scriptures occurred on this day which are –

1 Construction of chariots on the occasion of Jagannath's chariot journey begins,

2. At the dictation of Vyasdev, Ganesh started taking down the Mahabharat,

5. King Bhagirath brought the Ganges from the Himalayas,

6. Goddess Annapurna (Laxmi) appeared on the earth and her worship began,

Rituals to be performed on this holy day are –

1. Take a bath in early morning,

2. Rub sindur on the idols of Ganesh and Laxmi,

3. Put on clean clothes and donate as much as possible to others, particularly the poor,

5. Married women can donate alta (lac-dye used by women to paint the borders of their feet) and sindur.

6. If possible it is better to buy gold, silver, gem or any other precious metal item,

7. Clothes or food may be given to the needy. It brings peace in the world,

8. In the evening, wash your hands and face again and pray to Ganesh,

9. Distribute Prasad (sacred food offered to idols) among family members and others after worship.

According to another story in the Mahabharat, after losing the dice game to the Kauravs, the Pandavs were forced to go into exile for 12 years and one year anonymity. While in the forest, sage Durbasa with his disciples suddenly came to the hut of the Pandavs on this day at the conspiracy of the Kauravs. At that time the Pandavs had no food in their store. They became terrified apprehending that the ill-tempered sage might curse them if he is not entertained properly. At the prayer of Draupadi just then Krishna came there. He ate the only grain of rice stuck to the corner of a pot and belched that filled the stomachs of Durbasa and his disciples. The Pandavs escaped from the wrath of Durbasa.

There is a close relationship between this day and broken tooth of Ganesh. Vyasdev agreed to compose the Mahabharat but he laid down condition that he would dictate and someone would take it down. Moreover, there will be no interruption till the end. Question arose who would take down so long a dictation. According to Brahma, Ganesh is the only person fit for it. While writing one day Ganesh's pen suddenly broke but Vyasdev did not stop dictating. Instantly Ganesh broke one of his teeth for using it as pen. The rest of Mahabharat was written in that akshay ivory. For this reason Ganesh is seen one-toothed.

Wealth and this day are linked together. Gold and gem traders perform special worship. Householders also try to buy gold, gem or other precious metal ornaments according to ability. Mythology says that Mahadev himself gave the source of his eternal splendour to Kuber, the god of wealth on this day though Kuber is described as a thief and evil god in the Atharva Veda. According to the Ramayan, Kuber was the ruler of Lanka but Ravan expelled him forcefully and captured Lanka. Then Kuber engaged in austerities of Mahadev. Being pleased Mahadev gave him eternal wealth. Vishwakarma built his palace at Alaka near Kailash. It is traditionally believed that worshiping Kuber with Ganesh and Lakshmi on this day brings eternal wealth. In many ways Akshay Tritiya plays a significant role in religious life of the Hindus who believe.