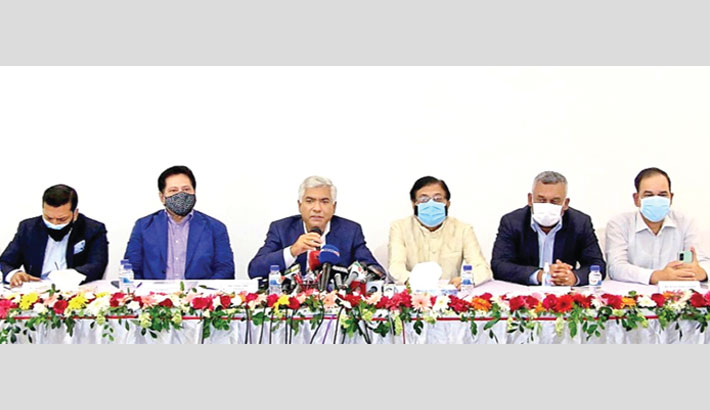 Newly-elected President of Federation of Bangladesh Chambers of Commerce and Industry (FBCCI) Md Jashim Uddin speaks at a press conference at the FBCCI office in the capital on Thursday.

Newly-elected President of Federation of Bangladesh Chambers of Commerce and Industry (FBCCI) Md Jashim Uddin pledged that his first priority is to protect the corona-hit cottage, micro, small and medium enterprises (CMSMEs).

He made the comment at a introductory meeting with media at the FBCCI office in the capital on Thursday.

The newly-elected board of FBCCI took over charge of the FBCCI for 2021-23 tenure on Wednesday.

Addressing the programme, Md Jashim Uddin said that although the government has allocated Tk 23000 crore (Tk 230 billion) to save the CMSMEs across the country, majority of them are yet to receive the loan from the stimulus fund because of banks' reluctance, non-banked entrepreneurs and stringent conditions attached to the loans.

“Many of the CMSMEs have been in a crisis due to a lack of capital and continuous losses in businesses since the Covid-19 outbreak. FBCCI will lobby the government, central bank and local business chambers to bail out the CMSMEs from the fallouts of the coronavirus,” he added.

Mentioning that the small entrepreneurs cannot thrive only with the benefit of tax, he said that they need more policy support as these units have faced a lot of challenging times because of the pandemic.

Jashim Uddin also said he will utilise the experiences of Malaysia, Thailand and Vietnam for the development of the CMSMEs. FBCCI needs to be reformed. It will work in the interest of traders and initiatives will be taken to form an effective FBCCI, increase the capacity of the organisation and improve the quality of service, Md Jashim Uddin said.

On May 5, the election board of the FBCCI declared the names of 78 directors who were elected uncontested.

Later, the directors, which include elected and nominated ones, elected the president, senior vice-president and six more vice-presidents for the next two-year term.