‘Rozina will get justice’ 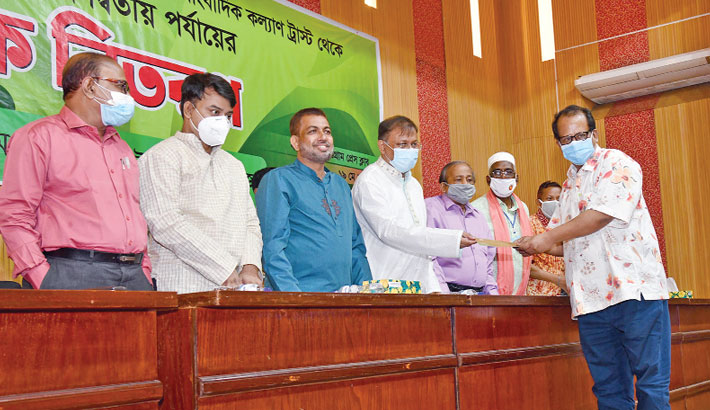 Information and Broadcasting Minister Dr Hasan Mahmud hands over a cheque to a journalist at a programme at Bangabandhu Hall of Chattogram Press Club on Wednesday. —SUN PHOTO

CHATTOGRAM: Information and Broadcasting Minister Dr Hasan Mahmud said that Prothom Alo Senior Reporter Rozina Islam will get justice in the case filed against her.

Terming the taking away of non-disclosure item from any government office without permission as unfair, the minister also called upon all to keep faith as the government is committed to ensure justice in this regard.

The minister said these while addressing as the chief guest at the second phase cheque distribution programme of journalists on Wednesday.

A total of 90 journalists from Chattogram were provided with the cheque of Tk 10,000 each from the Bangladesh Journalist Welfare Trust at the programme organised by Chattogram Union of Journalists (CUJ) at the Bangabandhu Hall of Chattogram Press Club.

The Minister Hasan in his speech said there is a process for applying to get information from any government office. If any office refuses to comply with the demand, there is Information Commission where the application can be submitted. A total of 119,831 applications were entertained after forming the commission in 2014, said the minister.

The present government led by Prime Minister Sheikh Hasina has been working to protect the dignity of the journalists, he observed. “We are monitoring the matter so that the journalist gets justice,” said the minister.

None can disclose the country’s confidential document or any agreement having condition or request for not to disclose to outside and it is the responsibility of the concerned minister or ministry to protect it, said Hasan.

“We will ensure that Rozina will get justice. I talked to the health, home and law ministers repeatedly regarding the issue to ensure highest facilities for her in the police and jail custody,” he informed.

The health minister has already explained the incident that happened at the ministry on that day. The committee formed in this regard will unearth the real incident including any fault of any one of the health ministry, he hoped.

Criticising the role of different organisations including Amnesty International, the minister said the organisations gave statements regarding the issue of Rozina, but they didn’t come up with statement regarding the Palestine where hundreds of people are being killed.