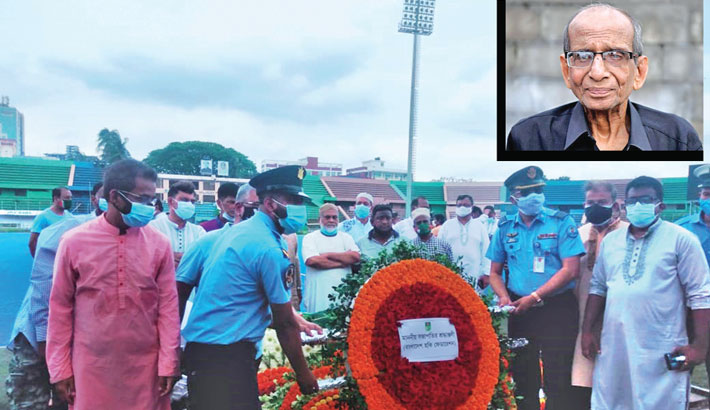 Former national hockey player and veteran administrator Shamsul Bari breathed his last at a city hospital in the capital on Tuesday. He was 75 years old.

Shamsul left behind wife, a daughter, two sons and many well-wishers to mourn his death.

Shamsul had been suffering from post-Covid-19 complications along with different old-age complications such as diabetes, kidney disease. He was infected with coronavirus at the beginning of this month.

Shamsul was born in Rajshahi in 1946 and started his national career in 1968 during erstwhile Pakistan.

After the liberation war, he played for Bangladesh national team from 1972 to 1978. He was made the assistant captain of the national team in 1972.

After retirement, he worked as a judge and umpire for a while. Shamsul, who completed his MSc in chemistry from Dhaka University, was awarded by DU hockey blue in 1972.

Shamsul served as hockey federation general secretary for 19 years from 1988 to 2007 after playing the role of joint secretary from 1984 to 1988. He was also an executive member of the Asian Hockey Federation from 2002 to 2010.

Shamsul also played the role of the deputy secretary-general of Bangladesh Olympic Association.

The veteran received Bangladesh Sports Press Association award in 1977, 1994 and 1995 respectively for his tremendous role as a hockey player and organiser. Besides, he was awarded an Asian Hockey Federation Member of Honour in 2010.

BHF along with Bangladesh Football Federation, Bangladesh Olympic Association and many other sports organisations expressed their deep bereavement at the passing away of the hockey legend and extended condolences and sympathies to his family.

Shamsul’s Namaz-e-Janaza was held after the zuhr prayer at the Maulana Bhasani National Hockey Stadium. Later he was buried at the Banani graveyard.