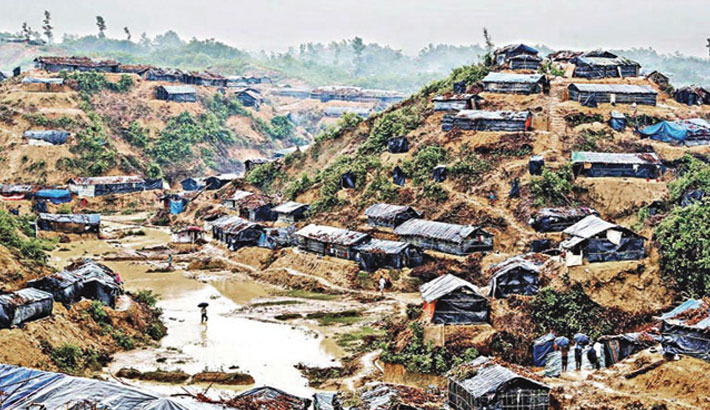 Nature is a precious gift of god and everyone in this world depends on nature and ecosystem for decent and healthy living. Bangladesh is a biodiversity rich country and an important hub of global biodiversity. Every moment, we are dependent on biodiversity for our food, clothes, shelter, medicine, education and recreation. Our life and livelihood largely depends on the ecosystem services provided by biodiversity.

But in recent decades, people have accomplished unprecedented changes in nature and ecosystem to satisfy their increasing demands. In the absence of natural resources and a congenial atmosphere on earth, the existence of mankind would be very hard to think about. History reveals that bonding between the human species and the environment started at the very outset of human civilisations.

Due to geographical location and tropical climate, Bangladesh is very rich in biodiversity. The country has hills, ocean, rivers and diverse landmass being full of multidimensional biodiversity from ancient times. But in recent times, because of population growth, environmental degradation, climate change, anthropogenic activities and some other causes, our biodiversity and ecosystems are losing their original state.

The United Nations Environment Program (UNEP) has declared this decade from 2021-2030 as the UN Decade on Ecosystem Restoration. The theme of this year’s ‘World Environment Day’ on June 5, 2021 is ‘Ecosystem Restoration’. The world had observed the ‘World Forest Day’ on March 3, 2021 and the theme was ‘Forest Restoration: A Path to Recovery and Wellbeing.’ It is a matter of great pleasure for our flora and fauna that the international events are putting emphasis on the restoration of biodiversity and ecosystem.

Healthy ecosystem provides a wide range of valuable goods and services to the people. We obtain food, wood, fuel, fresh water from the ecosystem. Supporting activities like nutrient cycling, soil formation are completed by the ecosystem. We depend on the ecosystem also for climate regulation, flood regulation, disease regulation and water purification. Nature gives us different aesthetic values as well as recreational, spiritual and educational values.

Especially from the forest ecosystem, we obtain different services like food, timber, fresh water, fuel wood, carbon sequestration, medicines, recreation and many others. Forests play a great role in combating climate change effects and prevent loss of lives and assets from the high thrust of disasters like cyclones and tidal surges.

So, today’s greatest need is to conserve our existing forests and restore the forests where they are diminished, denuded or degraded. For suitable ecosystem restoration initiatives, there is huge importance of flawless ecosystem assessment. Ecosystem Assessment is required to understand the effects of changing ecosystems on human well-being and to provide information to the decision makers for ameliorating conservation and sustainable use of the components of the ecosystem.

When there is a lack of non-forestry income and the community depends on the forest for their livelihood, it may cause continuous biodiversity loss of the forest area. The native ecosystems have faced severe degradation due to indiscriminate cutting of trees from the hills and forests of the country. For a successful biodiversity restoration initiative, ensuring livelihood of the people who are dependent on the forest is a major issue.

As a result of violence in the Rakhine State of Myanmar, an estimated seven lakh Rohingya people reached Cox’s Bazar crossing the border since August 25, 2017. The Rohingyas were sheltered in Ukhia and Teknaf, two Upazilas of Cox’s Bazar district. This area is geographically and culturally distinct from other areas of the country as most of the area is hilly with very little plain land.

To accommodate the mass influx of Rohingya people, a lot of makeshift houses were constructed. Forestlands were razed to build settlements in the camp areas resulting in enormous threat to the biodiversity, wildlife habitat and entire ecosystem of the region. In the first few months, these people were fully dependent on forest resources for their daily need of fuel wood. The hilly forest cover was destroyed in Ukhia and Teknaf Upazilas for building makeshift shelters, roads, water sources, offices, schools and other necessary infrastructures for the Rohingyas.

In the early days of the Rohingya influx, collecting wood from the natural forests and community forests for fuel was a source of earning for the Rohingya people. Rohingya male, female and children were cutting trees from the hill forests and selling in the local markets after meeting their own needs. The influx had a direct impact on the land, forest, flora and fauna, habitat and ecosystems of the area. As the vegetation of a good portion of the area has been cleared, there is a significant impact on landscape and species diversity and vegetation abundance.

Human intervention caused food shortage, habitat shrinkage and breeding ground destruction for the wildlife. The movement path of Asian elephants had been divided into two because of the establishment of makeshift camps midway. The wild elephants are facing shortage of food and sometimes impediments in their movements. In most cases, a large portion of the rural people, living beside the forests, depends on the land and forests for their sustenance. For this reason, degradation of these resources happens rapidly. Our hill forest areas are not an exception to this scenario.

The environmental loss in Cox’s Bazar district due to Rohingya influx, needs massive recuperating programs for offsetting the degradation and adverse impacts on various environmental components. The restoration programs should be chalked out in a manner that will save the land as well as the resources of the area. Forest degradation in the hill areas has been a longstanding issue in Cox’s Bazar district, and that has been exacerbated by the Rohingya influx.

It is praiseworthy that some afforestation and reforestation programs in some parts of the denuded and degraded hill forest areas are going on. For biodiversity concerns and climate change issues, the government has put importance on restoration of the native forest ecosystems. If a restoration effort is in line with the cultural norms of the community, it will generate economic returns to them and create feelings of ownership which will bring success to the restoration program. We need to remember that for making any restoration program effective, it should be both technically achievable and socially acceptable.

The writer obtained a Masters in Environmental Conservation from Greenwich University, UK.