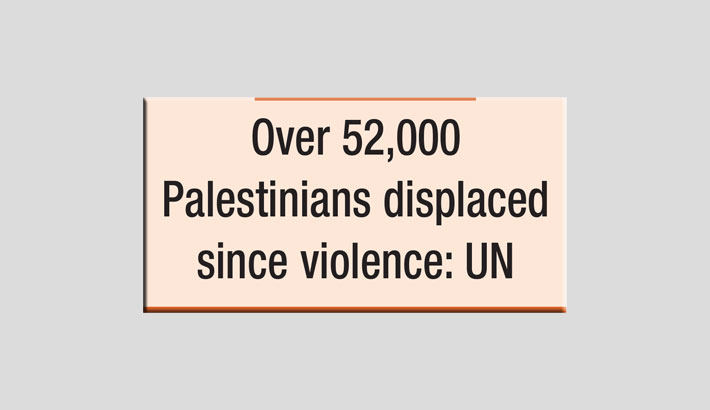 GENEVA: More than 52,000 Palestinians have been displaced by Israeli air strikes that have destroyed or badly damaged nearly 450 buildings in the Gaza Strip, the UN aid agency said on Tuesday, reports Reuters.

In a separate statement on the conflict, rights group Amnesty International said Israel air strikes on residential buildings might amount to war crimes. Israel says it hits only legitimate military targets and that it does all it can to avoid civilian casualties.

About 47,000 of the displaced people have sought shelter in 58 UN-run schools in Gaza, Jens Laerke, a spokesman for the United Nations Office for the Coordination of Humanitarian Affairs (OCHA) in Geneva, told reporters.

Laerke said 132 buildings had been destroyed and 316 had been severely damaged, including six hospitals and nine primary health care centers as well a desalination plant, affecting access to drinking water for about 250,000 people.

The UN agency welcomed the fact that Israel had opened a border crossing for humanitarian supplies but called for another crossing to also be opened.

The UN and its humanitarian partners are providing food and other assistance to displaced families when the security situation allows, Laerke said.

There is a severe shortage of medical supplies, a risk of water-borne diseases and the spread of COVID-19 because of displaced people crowding into schools, said Margaret Harris, a spokeswoman for the World Health Organization. London-based Amnesty International called for an investigation into air strikes on residential buildings in Gaza.

“Israeli forces have displayed a shocking disregard for the lives of Palestinian civilians by carrying out a number of airstrikes targeting residential buildings in some cases killing entire families — including children — and causing wanton destruction to civilian property, in attacks that may amount to war crimes or crimes against humanity,” Amnesty said.

Amnesty, which urged both sides last week not to violate humanitarian law, said it had documented four deadly attacks by Israel launched on residential homes without prior warning and called on the International Criminal Court to investigate.

It said Israeli strikes on May 11 destroyed two residential buildings belonging to the Abu Al-Ouf and Al-Kolaq families, killing 30 people, 11 of them children. A mother and three children were killed on May 14 when the Al-Atar family’s three-story building was hit, it said.

It said the home of Nader Mahmoud Mohammed Al-Thom, where he lives with eight others, was attacked without warning on May 15.

Israel did not immediately comment on the specific cases.