‘Extraordinary’ Suarez leaves Atletico on the brink of Liga title 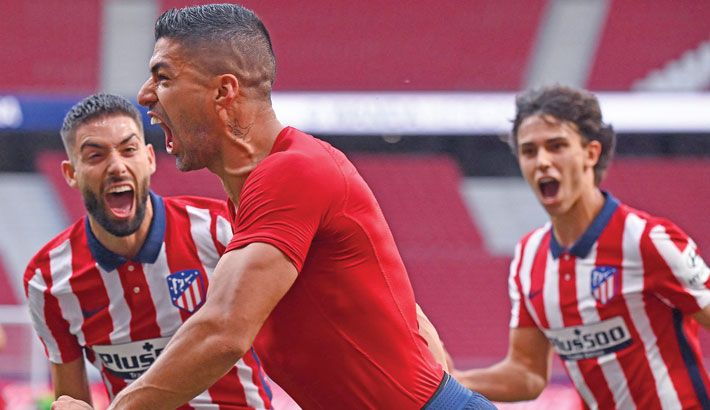 Diego Simeone hailed Luis Suarez as "extraordinary" on Sunday after the Uruguayan scored the goal that could win Atletico Madrid La Liga, his late winner snatching a dramatic 2-1 win over Osasuna.

Atletico trailed Osasuna with nine minutes to go at the Wanda Metropolitano and faced a defeat that would not just have postponed their bid to be champions but allowed Real Madrid, who were beating Athletic Bilbao, to go top with one game left.

Instead, Atletico scored in the 82nd and 88th minutes to pull off a stunning turnaround. Renan Lodi smashed in an equaliser before Suarez proved the hero, firing in from eight yards to spark mass celebrations.

"He's extraordinary," said Diego Simeone. "He came here wanting to prove people wrong, wanting to show that he was a forward still at the top of his game. Who better than him to decide a match that seemed to be getting away from us?"

Atletico's players and substitutes piled onto Suarez in the corner and at full-time, some of their players dropped to their knees, not with ecstasy, but relief, the title now just one win away.

"These are moments of happiness," said Suarez. "It was one of the best first halves of the season. We missed a lot of chances, me in particular, but to win the league you have to suffer and today we stepped up."

To be crowned champions with a game to spare, Atletico needed Real Madrid to slip up at San Mames but Nacho Fernandez put Real ahead in the second half and Atletico's priority quickly became preservation.

Victory maintains their two-point advantage and another win away at Real Valladolid next weekend will guarantee a second league title in 25 years.

Barcelona are out of the running after they lost 2-1 at home to Celta Vigo. Santi Mina scored twice, including an 89th minute winner for Celta after Lionel Messi headed in the opener.