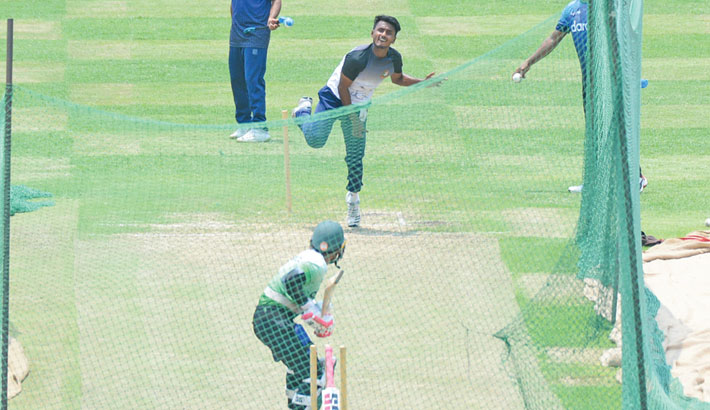 Bangladesh leg-spinner Aminul Islam bowls during a training session at the Sher-e-Bangla National Cricket Stadium in the capital on Monday. – TANVIN TAMIM

Bangladesh looked desperate to make sure that they are well prepared to handle the Sri Lankan wrist spinners - Wanindu Hasaranga and Lakshan Sandakan - as they are expected to pose a threat to them in the upcoming three-match ODI series, slated from May 23.

Another leg-spinner Rishad Hossain was also seen in the national nets trying to help the batsmen get adapted to leg-spin bowling.

Bangladesh national team’s performance analyst Shrinivas Chandrasekaran said they need to be more careful against Hasaranga as he can change the game with his bowling.

“Obviously he is a threat,” Shrinivas told The Daily Sun, adding that they need to make sure he doesn’t pick too many wickets. “If we don’t give him wickets during this series we will keep posting good totals,” he added.

According to the analyst, Hasaranga’s googly is quite similar to Rashid Khan and Adam Jampa as all of them use their middle finger to impart turn.

However, in Hasaranga's case, the googly ball is visible for the batsman as he doesn't bowl this delivery from the back of the hand. Instead, he uses his middle finger to impart the turn.

“Him (Hasaranga), Zampa and Rashid are almost the same and this is a new way by which leggies bowl googlies these days,” Shrinivas said, who is seeing Rashid from close quarter due to his association with Sunrisers Hyderabad in the IPL.

Bangladesh batsmen also need to make sure that left-arm chinaman Sandakan doesn’t get over them in the series considering they are troubled by leg-spinners more often. The major reason behind their worry about leg-spinners is considered to have a lack of leg-spinners in the domestic scene and because of it, they can’t hone their skill to handle them with ease.

Shrinivas, who is staying in India after he failed to get a flight to reach Dhaka following the postponement of IPL, added that he’s keeping in touch with the Tigers through Whatsapp.

“Already done,” Shrinivas answered when he was asked whether he is giving his inputs through WhatsApp. “I generally do all the pre-tournament preparation work well in advance so it gives players time in net practice,” he concluded.

Bangladesh will resume their official preparation today at the Sher-e-Bangla National Stadium after the preliminary squad members completed their third round of the Covid-19 test on Monday.

BCB officials said that all the members were corona negative in the previous corona tests.

The players and staff will go for the last Covid-19 test on May 22, a day before the ODI series starts.

IPL returnees Shakib Al Hasan and Mustafizur Rahman are expected to join the team on Wednesday.