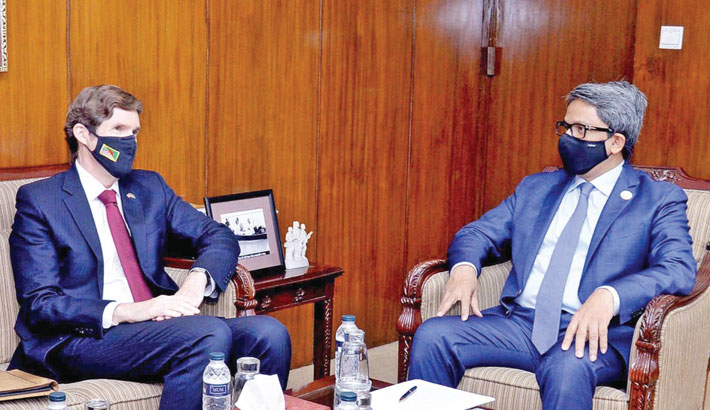 US Ambassador to Bangladesh Earl R Miller meets State Minister for Foreign Affairs Md Shahriar Alam at the Ministry of Foreign Affairs in the capital on Monday. —SUN PHOTO

State Minister for Foreign Affairs Md. Shahriar Alam has urged US Ambassador to Bangladesh Earl R. Miller to take proactive role for stopping the bloodshed immediately in Palestine and reiterated Bangladesh’s support for the two-state solution.

The minister made the call when the US Ambassador called on him at the Ministry of Foreign Affairs on Monday.

Shahriar Alam and Miller exchanged views on a number of global and bilateral issues, including the launching of the annual Joint Response Plan (JRP) for the humanitarian operations for displaced Rohingyas, the Israeli-Palestinian conflict, the Covid situation and vaccine issue.

The US Ambassador said that the US would again be the largest contributor in the JRP for Rohingyas, which will be virtually launched today and will be co-chaired by State Minister Shahriar Alam.

He also stated that the US would continue its support for Bangladesh in bearing the burden of the displaced population.

The State Minister emphasized that sustainable repatriation of the Rohingyas remains as the priority of Bangladesh, and also laid emphasis on receiving international support for the displaced Rohingyas relocated to Bhashan Char.

He urged for providing timely visa interview slots for Bangladeshi students intending to go to the US for studies, observing that a large number of students are facing difficulties.

The US ambassador assured him that they are working on resolving the backlog created by the lockdown situation.

The state minister also observed that the recently published report by the US Government on religious freedom in Bangladesh did not well reflect the ground scenario, as the Government is making its best efforts to ensure communal harmony and non-discrimination in the country.

Recalling that the present Government has introduced the Vested Property Return (Amendment) Act in 2011 under difficult situation, he emphasized on the Government’s sincerity to resolve the issue.

He also underscored that the Chittagong Hill Tracts Peace Treaty in 1997 was also signed by Prime Minister Sheikh Hasina’s Government, and the implementation of the Treaty is being held gradually.

He opined that the examples in the report are discrete incidents and action has been taken by the Government against the perpetrators.

State Minister Alam and the US Ambassador also discussed the ongoing cooperation between the two countries in combating Covid-19 pandemic, including the issue of providing vaccine for meeting Bangladesh’s immediate needs.

The US Ambassador said that his Government is working on this, and he has recommended having a regional approach in South Asia in distributing vaccines from the US. He also said that the US Government is exploring the possibilities to produce US vaccines in Bangladeshi pharmaceutical companies.