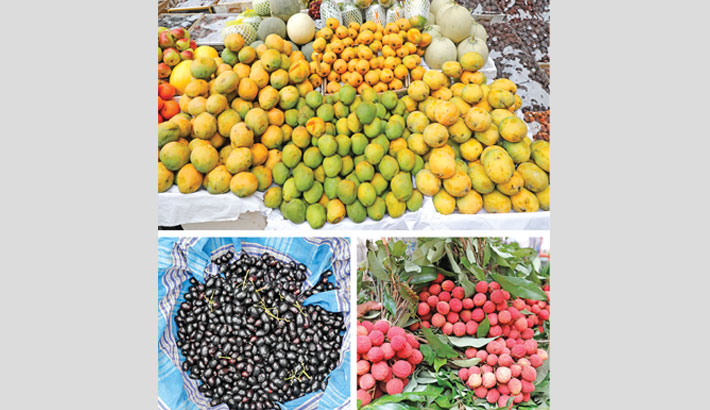 Summer fruits, including mango, litchi and blackberry, have hit city markets. However, their prices are high. —Kamrul Islam Ratan

Tainted seasonal fruits including mangoes, litchi and blackberry are being sold indiscriminately in markets across the country due to inadequate anti-adulterated drives.

Consumers have no way to know how safe the fruits are as a section of people allegedly ripe fruits, especially mangoes, with various harmful chemicals to make higher profits.

The government has fixed the mango harvesting timeframe according to the ripening time of different types of mangoes in different areas to prevent adulteration. But the orchard owners and traders brought different mango varieties to the markets before the harvesting time to get extra profit, sources said.

Due to inadequate monitoring against adulterated fruits by the government authorities, adulterated and artificially ripen fruits have flooded the markets, market insiders have alleged.

Dr Mehedi Masood, project director of Year-Round Fruit Production for Nutrition Improvement under Department of Agriculture Extension (DAE), told the Daily Sun that harvest of mangoes has started in the southern region like Sathkhira, Jashore and some other districts while harvesting of local guti variety also started in the northern region.

The District administration of Rajshahi has recently moved to prevent adulteration in the mango ripening process using harmful chemicals.

According to an administrative decision, the farmers can pluck local varieties of mango from May 15 while harvest of Gopal Bhog mangoes will commence on May 20 and Laxmanbhog, Laukhna and Ranipasand varieties will start on May 25.

The sweetest varieties of mango – like Khirsapat and Himsagar – will start hitting the markets on May 28, while Langra will begin on June 6. Harvest of Fazli and Amrapali will start on June 15. Ashwina and BARI Mango-4 varieties can be harvested from July 10.

However, the traders in the capital have already brought different popular varieties of mango like Himshagor before the harvesting time.

Consumers are being deceived after buying those mangoes at higher prices as the taste and nutrition value are not the same as the properly ripen mangos.

Golam Rahman, Chairman of the Consumer Association of Bangladesh (CAB), said the consumers should aware of the mangoes and follow mango harvesting time for buying different mango varieties.

He also said the government has to launch adequate mobile court drives to control the adulteration of seasonal fruits.

The Bengali month Jaishtha is locally called “Modhumash” as wide verities of juicy fruits are being appeared in the market. Mango, litchi, jackfruit, guava, watermelon, musk melon, palm fruit, sugar apple,  papaya, pineapple, latkon, woodapple, different varieties of berries and other juicy fruits appear in the market during this time.