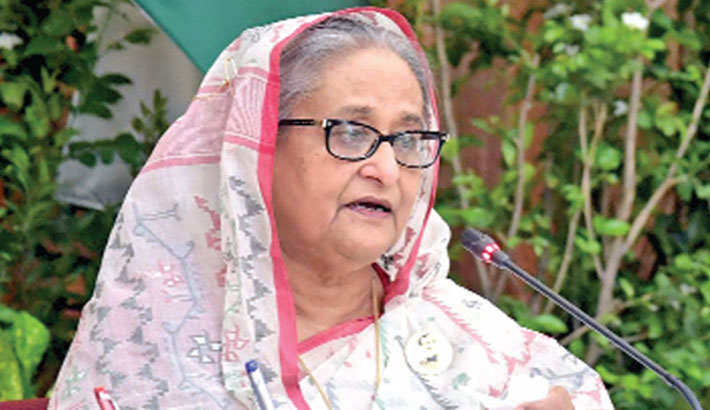 Prime Minister Sheikh Hasina on Monday said Bangladesh has established itself as a developing country, defying numerous challenges and obstacles both from home and abroad.

“We’ve got established ourselves as a developing country. We’ve reached here overcoming so many hurdles both from home and abroad,” she said.

The Prime Minister said this in her introductory speech at the weekly Cabinet meeting held at Bangladesh Secretariat. She joined it virtually from her official residence Ganabhaban, reports UNB.

She vowed to build Bangladesh as ‘Golden Bangladesh’ as dreamt by Father of the Nation Bangabandhu Sheikh Mujibur Rahman.

“Bangladesh is now independent, and it’ll remain independent. We’ll build it as Golden Bangladesh of the Father of the Nation,” she reaffirmed.

Sheikh Hasina hoped that Bangladesh will advance further in the coming days from where it is now standing.

Talking about her 40th homecoming day, the Prime Minister said she returned to her homeland defying all the odds and obstacles.

“There were many restrictions…the then government wouldn’t allow me to return in any way, there’re various conspiracies against me,” she recalled.

Hasina said the war criminals, the trial of whom was started by Bangabandhu, was stopped and they were released, and even they were in power as the killers were given the indemnity. “I didn’t think anything…I just returned.”

Sheikh Hasina, also the Awami League president, said it crossed her mind at that time that the country’s independence must not be allowed to go in vain. “It has to be made meaningful. It’s also there in Sheikh Rehana’s mind.”

She expressed her heartfelt gratitude to the activists and leaders of the then Awami League who made her president in her absence.

She expressed gratitude to the people of the country as well the leaders and activists of Awami League for this.

Today is the 40th homecoming day of Awami League President. On May 17, 1981, she returned home after a long exile.

Boarding an aircraft of Indian Airlines, Awami League President Sheikh Hasina reached the then Kurmitola Airport here from the Indian capital of New Delhi via Kolkata at 4.30pm on the day.

Father of the Nation Bangabandhu Sheikh Mujibur Rahman was brutally killed along with most of his family members on August 15 in 1975 and his two daughters – Sheikh Hasina and Sheikh Rehana – luckily escaped it as they were abroad.

In a national council session of the Awami League on February 14-16, 1981, Sheikh Hasina was elected party president, giving the party a much-sought impetus.