Returning to Capital after Eid 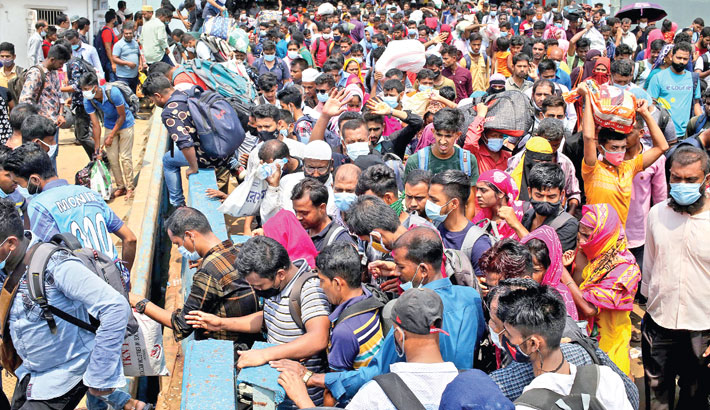 Eid holidaymakers have started returning to the capital. In the photo taken from Shimulia Ghat in Munshiganj district on Monday, people were seen scrambling to get down from a ferry paying no heed to health guidelines. SUN PHOTO

People continued to swarm onto highways and ferry terminals in violation of health guidelines on Monday to return to the capital after celebrating Eid with their near and dear ones.

Like the previous day, people thronged Banglabazar-Shimulia and Daulatdia-Paturia ferry ghats, two major river channels of the country, to return to the capital.

Sufferings of the holidaymakers knew no bounds at both the ferry terminals as they struggled to get on vehicles. A small number of vehicles available there also charged them excessive fares.

Motorcycles, slow-moving vehicles such as CNG and battery-run auto-rickshaws and pick-up vans were the only vehicles available to carry people to Dhaka.

Thousands of people struggled to make their way back as long-haul bus service remain suspended due to the lockdown. Many were charged extra for their travel to Dhaka.

“Rush of passengers began early Monday. They are crossing the river Padma by ferries. We gave priority to truck and ambulance service. Law enforcers are trying to manage the situation at the ferry ghats.”

“Ferry service was kept operational on an emergency basis,” says BIWTC AGM Shafiqul Islam. “But people returning to their workplaces are swarming onto the ferries to cross the rivers. This is increasing the risk of spreading the corona virus.”

“Some people are also coming to Shimulia and Paturai fery ghats from Dhaka to cross the river Padma when we are struggling to handle  huge rush of people heading towards Dhaka, he said.

Despite a ban on long-haul services amid Covid-19 restrictions, buses from northern districts like Panchagarh, Dinajpur, Rajshahi, Natore and Pabna were seen operating on the highways.

“[But] many long-distance buses hit roads despite being booked multiple times,” he added.

In a bid to check spread of coronavirus, the government urged people not to travel to their hometowns for Eid-ul-Fitr. But thousands of people went home to celebrate Eid.

The holidaymakers started thronging the river channels and highways after the government announced further extension of the countrywide lockdown over corona.

On Sunday, the Cabinet Division issued a circular, extending the countrywide lockdown until May 23 in a bid to contain the spread of deadly coronavirus or  Covid-19.