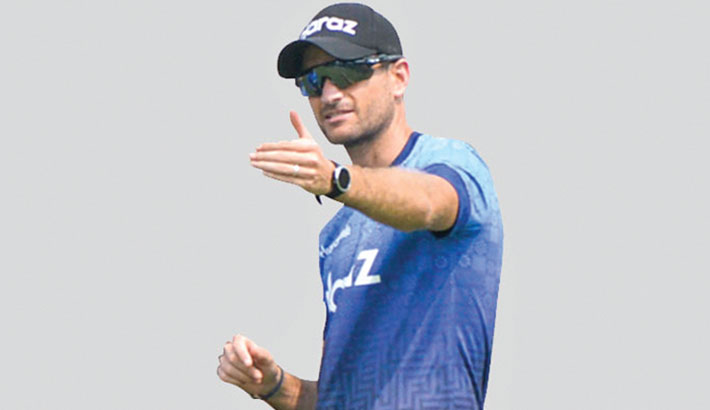 Ryan Cook joined as the fielding coach of Bangladesh national cricket team during their away series against West Indies in July 2018. During his nearly three-year stint with the Tigers, the South African witnessed so many ups and downs of the Tigers’ fielding department. Cook’s job recently came under scrutiny during Bangladesh’s series against New Zealand where the fielding unit was heavily exposed with a shambolic performance in New Zealand which cost them conceding clean sweeps in both ODI and T20I series. Cook recently talked to The Daily Sun and shared his observations on why Bangladesh failed in New Zealand as a fielding unit, their current approach in the practice sessions and matches and the recent performance in Sri Lanka.

The Daily Sun: Our fielding was below par in New Zealand? Do you feel we failed to adapt to that condition?

Ryan Cook: That may have been a part of it. There are some differences in the conditions. However, we did have preparation prior to the series to try to adjust. Once the games commenced there were limited times between games to train. There were some conditions that we had to adapt to especially at night and in the wet on a few occasions which may have provided added difficulty.

The Daily Sun: What do you feel about failing to carry on the same body language for the whole match after someone missed any catch?

Ryan Cook: We gain great confidence from when we achieve brilliance with bat, ball and in the field and sometimes the momentum can shift in the other direction too.

The Daily Sun: Do you feel after someone missed any catch, it goes into our head and we fail to remove it?

Ryan Cook: Many factors can contribute to the error in the first place and it’s not always easy to pinpoint the reason or the ‘knock-on’ effect that this may have. We try to encourage a mindset for the players to ‘achieve brilliance’ rather than error avoidance as this can lead to more mistakes. We also try to encourage everyone to stay in the moment and execute on the next ball with a ‘go for it’ mentality.

The Daily Sun: Balls travel faster in those conditions and do you feel this is one of the reasons we failed as a fielding unit?

Ryan Cook: It seems that the ball does travel faster through the air and perhaps of the surfaces in New Zealand. Many of the touring teams struggled fielding in New Zealand this year. We had spoken of this and practised for this but it needs adjustment in match time.

The Daily Sun: The sky is very clear there and it can be difficult because the white ball gets lost at times. Do you feel the same way as what Nasum Ahmed said in his observations?

Ryan Cook: A few did mention this observation and we did speak about how to cope with it technically and tactically. We also practised throughout our quarantine practices and camp in Queenstown on this specific issue. Once again, this needs adjustment to the condition.

The Daily Sun: The Kiwis made lots of ones into twos and twos into threes. Do you feel in ground fielding we don’t show aggression or we fail to cover due to our physique?

Ryan Cook: The New Zealand batsmen do put pressure on fielders by running hard between the wickets and this is one of the hallmarks of their successful style of play in recent times. There can be cases where positioning or tactical understanding can reduce these occurrences. Ultimately, the players are trying for excellence and are doing as best they can with their skillets.

The Daily Sun: Do you feel if their practice duration is increased it will help considering they’re not very familiar standing as a close-in fielder for a long time considering national cricketers aren't featuring regularly in first-class cricket?

Ryan Cook: Not sure if practice duration is the answer as this is difficult to replicate in all facets of the game. I do feel that more emphasis on this part of the game would help to keep upskilling in fielding. Having fielding as a priority for all players through the system should be a focus area and seen as an important aspect of every player’s performance. This should be reflected by the time and effort given to this skill during practices throughout the pipeline.

We are always trying our best to improve our preparations and practices at all times especially leading into a series. We try to make them as replicable to the match situations as possible in terms of positioning and execution. We try to take pride in our fielding both in practices and matches.

The Daily Sun: How do you rate our fielding in the Test series against Sri Lanka?

Ryan Cook: The players kept good energy throughout the innings, which was commendable in the conditions and for the period of time. There were obviously some chances which were missed, however, some moments which were pleasing to see.