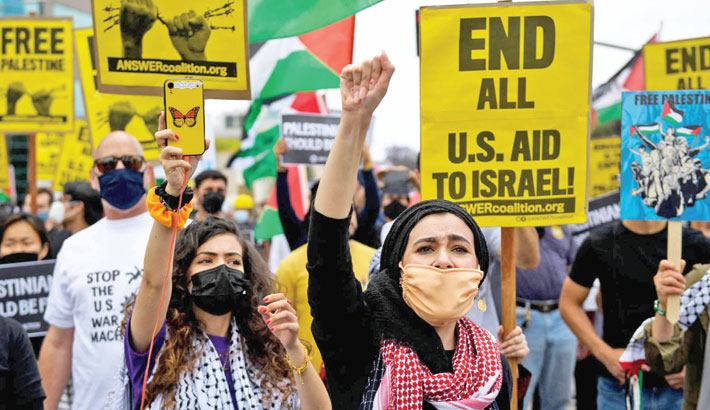 People demonstrate in support of Palestine during a protest on Saturday in Los Angeles. —AFP PHOTO

LONDON: Thousands of protesters marched in support of Palestinians on Saturday in major European cities including London, Berlin, Madrid and Paris, and in the United States in Boston and Washington, DC as the worst violence in years raged between Israel and Hamas in Gaza, reports AFP.

Packed crowds stretched all along Kensington’s High Street where the embassy is located.

Organisers claimed as many as 100,000 people had gathered for the demonstration though London police said they were unable to confirm any figure. “The group is spread across a large area which makes it impossible to count them,” a Metropolitan Police spokesman said.

“Officers are engaging with a group of people who have gathered for a demonstration in central London this afternoon,” the police said in a separate statement, adding that a plan was in place to curb the spread of Covid-19.

“This time is different. This time we will not be denied any more. We are united. We have had enough of oppression,” Palestinian Ambassador Husam Zomlot told the demonstrators. “Today we are saying enough, enough with the complicity,” he added. Simon Makepace, a 61-year-old accountant said he had joined the protests because “the whole world should be doing something about it, including this country”.

He was critical of the US, which he said was unfairly backing Israel, and urged Washington to “make peace and stop what’s happening”.

In Madrid, some 2,500 people, many of them young people wrapped in Palestinian flags, marched to the Puerta del Sol plaza in the city centre. “This is not a war, it’s genocide,” they chanted.

“They are massacring us,” said Amira Sheikh-Ali, a 37-year-old of Palestinian origin.

“We’re in a situation when the Nakba is continuing in the middle of the 21st century,” she said, referring to the “catastrophe”, a word used by Palestinians to describe Israel’s creation in 1948 when hundreds of thousands fled or were driven out.

“We want to ask Spain and the European authorities not to collaborate with Israel, because with their silence, they are collaborating,” said Ikhlass Abousousiane, a 25-year-old nurse of Moroccan origin. The marches came amid the worst Israeli-Palestinian violence since a 2014 war in Gaza.

Thousands marched in Berlin and other German cities following a call by the Samidoun collective.

Three marches were authorised in Berlin’s working class Neukoelln southern district, home to large numbers of people with Turkish and Arabic roots. The protesters shouted “Boycott Israel” and threw paving stones and bottles at the police, leading to several arrests.

Other protests were held in Frankfurt, Leipzig and Hamburg.

On Tuesday, Israeli flags were burnt in front of two synagogues in Bonn and Muenster. Police officers used tear gas and water cannon in Paris to try to disperse a pro-Palestine rally held despite a ban by authorities.

Around 500 people rallied in Athens, AFP correspondents said. Greek police used water cannon and there were minor scuffles with protesters in front of the Israeli embassy.

Gatherings to show solidarity with Palestinians also took place in the United States in cities including Boston, Washington, Houston, Texas and Dearborn, Michigan as well as Montreal in Canada.

Several hundred people turned out in the Bay Ridge area of Brooklyn, New York, chanting “Free, free Palestine” and “From the river to the sea, Palestine will be free.”

They waved Palestinian flags and held placards that read “End Israeli Apartheid” and “Freedom for Gaza.”

Many protesters wore black and white, and red and white, keffiyeh scarves, while drivers sounded car horns and motorcyclists revved their engines as the sun beat down.