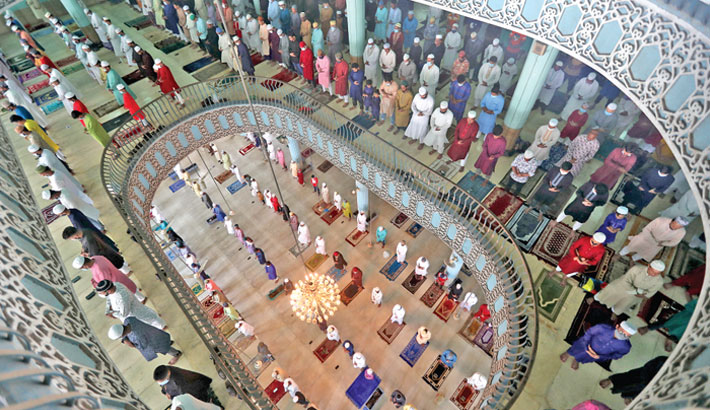 Devotees pray at one of the Eid-ul-Fitr congregations at Baitul Mukarram National Mosque in the capital on Friday. Reaz Ahmed Sumon

The Eid ul-Fitr, one of the biggest religious festivals of Muslims, was celebrated across the country with due solemnity, fervor and enthusiasm.

Like in the last year, Muslims all over the country went to different mosques to say the Eid prayers as the government didn’t allow prayer sessions at Eidgahs or open places due to the ongoing surge of Covid-19 cases.

The first congregation at the National Mosque in Dhaka began at 7:00am. Later, four more Eid prayer congregations were held.

President M Abdul Hamid along with his family members and some senior government officials offered Eid prayer at Darbar hall of Bangabhaban at 10.30 am on the day.

A special munajat was offered there seeking divine blessings for peace and progress of Bangladesh and welfare of the people as well as the Muslim Ummah.

Muslims across the country were asked to maintain social distancing while sitting and praying and were requested not to exchange the traditional hugs after the completion of the prayer and were even forbidden from shaking hands.

Prior to the prayers, the authorities repeatedly urged the devotees to follow the health protocol and imams also delivered sermons through the loudspeakers.

Law enforcers, including police, the Rapid Action Battalion and others in plain clothes, ensured security in the mosques so that devotees could offer their Eid prayers safely.