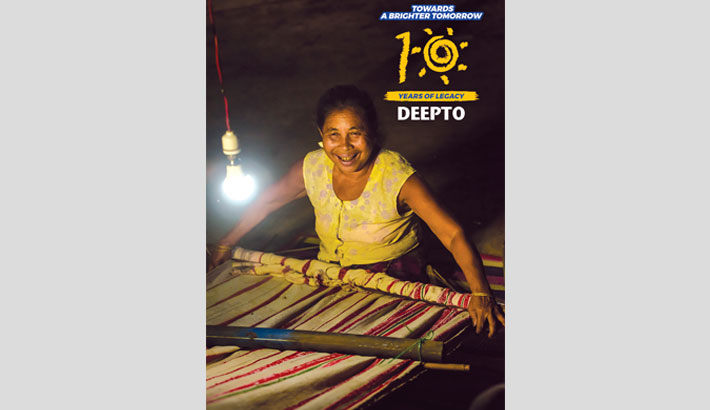 Deepto has installed solar home systems in the off-grid areas of the Chattogram Hill Tracts on the occasion of the International Day of Light on Sunday.

The solar home systems were provided free of cost to these marginalised communities, who experienced electricity in their lives for the very first time, said a press release.

A total of 2591 solar home systems were installed across 25 villages of Bandarban, Khagrachhari and Rangamati districts.

After the installation of the Deepto units, students were relieved of studying using meager kerosene lamps which often caused harm to their eyes.

Deepto has enabled them to study longer hours and excel in education. Moreover, families have also benefited from the extra cash which would otherwise have been spent on buying kerosene.

Thus, Deepto has played an active role in improving the living standards of these marginalized people by uplifting their social and economic conditions. Since its inception, Deepto has provided access to electricity through solar power to more than 15,000 beneficiaries.

Mohammad Alauddin, Additional Secretary and the Chairman of Sustainable and Renewable Energy Development Authority (SREDA), said, “Everyone who works for the development and expansion of renewable energy is our companion. We are happy to know that ‘Deepto’ has completed its ten years of endeavor in the renewable energy sector and has brought electricity to the people in remote hilly areas.”

The project has been awarded the internationally acclaimed ‘Asia Responsible Entrepreneurship Award-2018’ for delivering solar power to the poverty-stricken communities in the hilly areas.