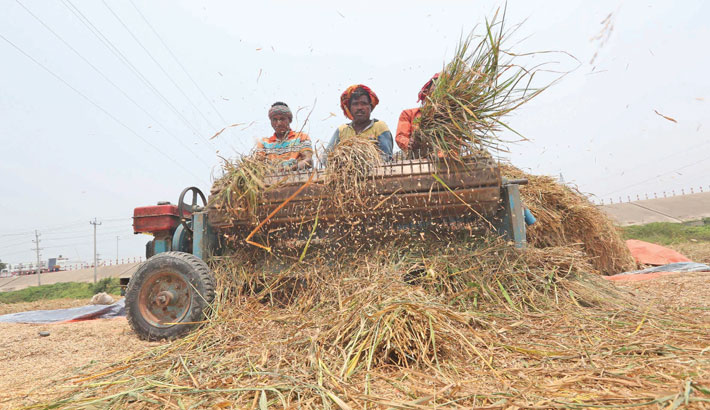 Farmers thrash Boro paddy at a field in Singair of Manikganj on Monday as part of a long process to turn paddy into rice. —SUN photo

Khulna: These days, farmersin Khulna district are a worried lot. Having grappled with drought and the unrelenting heat wave for the past eight months, the farmers fear they may not be able to even recover the production cost of boro paddy this year.

Though thefarmers are now looking towards the government for some financial help, there has been word from the authorities concerned on the situation so far. "We expected a good harvest, but inclement weather played spoilsport in harvesting this year," said a farmer, reports UNB.

In fact, the Department of Agriculture Extension (DAE) in Khulna has set a target to produce 57,000 metric tonnes of boro paddy on 57,540 hectares of land this year, of which 21,000 hectares have been brought under the dry season rice cultivation in Dumuria upazila alone.

Already, many farmers have harvested their paddy and threshing work is on. Boro is the dry season irrigated rice crop planted between December and early February and harvested from April to June.

However, the production of boro paddy may not be as projected in Khulna this year. Experts also attribute the inevitable shortfall in boro paddy output to drought, excessive heat, and dry weather in the district.

According to experts, boro paddy can tolerate up to 36 degrees Celsiusbut mercury soared 40 degrees last month in Khulna. "However, the production of high-yielding varieties is unlikely to take a hit," said an expert.