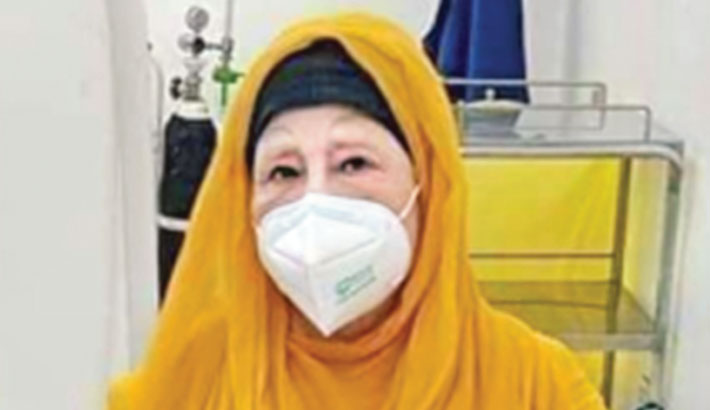 Bangladesh Nationalist Party (BNP) Chairperson Khaleda Zia has disclosed her ‘new date of birth’ and as per her coronavirus test report, she was born on May 8 in 1946.

“Finally, she (Khaleda Zia) has revealed her real date of birth by putting it on the personal information slip for doing Covid-19 test,” Awami League General Secretary Obaidul Quader said on Monday.

He was distributing corona protective materials and food assistance among 13 social and cultural organisations in a programme held on Bangabandhu Avenue in the capital.

Quader, also the road transport and bridges minister, said Khaleda Zia had been confusing the people for long about her real date of birth by providing several fake dates of birth.

Noting that the truth can never be hidden, Quader said August 15 carnage in 1975 was a cruel, barbaric and a tragic killing in the history of the world.

“But how cruel Khaleda Zia had been as she has been celebrating her fake birthday on this day,” he added.

“Celebrating a fake birthday on the day of killing of Father of the Nation Bangabandhu Sheikh Mujibur Rahman is an expression of cruel and hostile politics,” he said.

Quader said Khaleda Zia mentioned August 9, 1945 as her birthday in the matriculation certificate, September 5, 1945 in her marriage certificate, August 19, 1945 in her passport but she celebrates her birthday on August 15. Calling upon all to wear face masks and maintain health guidelines, the minister also urged people to stay alert during Eid journey to protect themselves from the deadly virus.