Razaul vows to cement his place in nat’l team 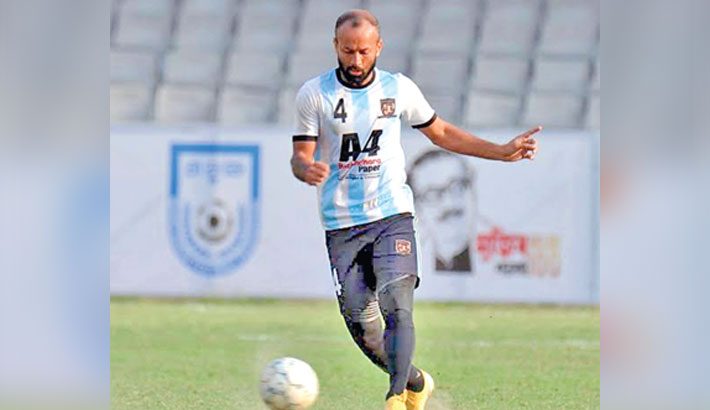 Defender Md Razaul Karim gets the chance to wear the national team jersey again after five long years but the 33-year old will face tough challenges to cement his place as there are many well-known defenders currently in Bangladesh team.

The country’s top defenders like Topu Barman, Rahmat Mia, Riyadul Hasan are strongly holding these positions along with some young talents like Tariq Kazi, Mehedi Hasan, who regularly get calls in the national camp.

Razaul said he knew about these challenges but he’s ready to take any challenge to fix his place in the national team.

“I always like to take challenges. I'm ready to compete with them (other defenders) to secure my place in the national team. They are good and playing regularly for a long time. On the other hand, I've returned after a long gap. But I'm confident enough to take their challenge,” Razaul told The Daily Sun on Monday.

“It’s a big thing for me that I get a call for the national team. It is a result of my long-time hard work. Everyone wants to play here,” Razaul, the former national captain, further added.

Razaul debuted for the national team in 2010. The left-back played a total of 17 matches and last played against Jordan in the World Cup qualifiers 2016.

His bad time started that year during Bangladesh Premier League. He received a big injury during a BPL match that year and it made his playing on the field absolutely uncertain. Razaul somehow managed to return to football but it took about two years and six months.

“That was a nightmare. I was out of the field for two years and six months. It was really hard for me but the real challenges came when I returned to football. I did a lot of hard work to fix my position in the league, it is still continuing,” he added.

Rezaul is now playing for Sheikh Jamal DC Ltd in the ongoing BPL. He played 16 matches for the club this season including 13 BPL matches and three Federation Cup matches. The defender also scored a goal for Sheikh Jamal against Ctg Abahoni Ltd on May 1.

It is assumed that his regular appearances in the ongoing BPL and goal-scoring ability made him a good choice for Jamie Day for the national team.

“I've also played all the matches in the last season before the Covid-19 outbreak. I'm trying to improve my performance gradually in the league,” he added.