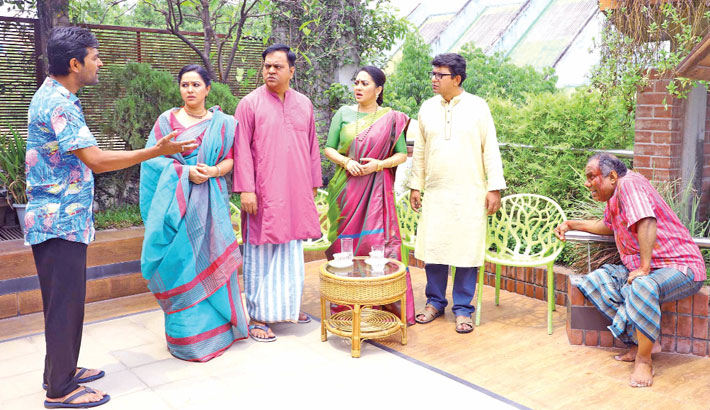 Renowned TV host and director Hanif Sanket makes Eid special dramas every year. His dramas are unique, and they contain lots of entertainment with social messages. The viewers eagerly wait for his drama on every Eid festival.

Like previous Eid festivals, Hanif Sanket is coming up with a new telefiction titled ‘Sot er Sotya Samachar’. He has written and directed the play. Popular actors, including, Chanchal Chowdhury, Tareen Jahan, Mir Sabbir, Nadia Ahmed, Sayed Babu and Subhashish Bhowmick have acted lead roles in the drama. The drama is the sequel of ‘Moner Moti Moner Goti’, which was aired last year Eid.

The shooting of the play has been completed at production house Fagun Audio Vision’s own complex in Mirpur. The drama’s title track has been written by Mohammad Rafiquzzaman.  Hanif Sanket has composed it while Mehedi has arranged the music. Komol has sung the song.

The story of ‘Sot er Sotya Samachar’ revolves around a village chairman, his brother and their families. The drama shows honesty and dishonesty through the family. Chanchal Chowdhury will be seen as the chairman and Mir Sabbir portrays his brother’s character. Tarin and Nadia have acted in their wife’s role respectively in the drama.

The drama will be aired on ATN Bangla at 08:15pm on Eid day.