Khaleda has no scope to go abroad 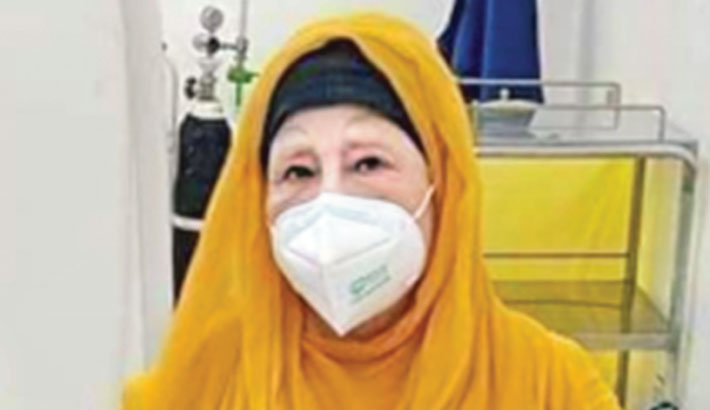 The government has rejected the appeal of the family of Bangladesh Nationalist Party (BNP) Chairperson Khaleda Zia for permission to take her abroad for better treatment.

“The application (submitted by Khaleda Zia’s brother Shamim Iskander, seeking permission to take her abroad for treatment) has not been not accepted,” Home Minister Asaduzzaman Khan said.

Asaduzzaman made the disclosure at a press briefing at his secretariat office in the capital on Sunday hours after his ministry got the law ministry’s opinion on the application.

Earlier, the home ministry, after receiving the application from BNP chief Khaleda Zia’s family, sent it to the law ministry for its opinion.

“In its opinion, the law ministry clearly mentioned that there was no scope in the law to accept the application as there was no precedence of allowing any convict to go abroad for treatment,” Asaduzzaman said.

He further said “The law ministry said there is no scope to accept the application [of Khaleda Zia’s family] under the section 401 (1) of the Code of Criminal Procedure for her treatment abroad as her [Khaleda Zia] conviction was already suspended under the same section.”

Replying to a question, Asaduzzaman said the home ministry sent the application submitted by Khaleda Zia’s family to the law ministry for its opinion as the government was considering the appeal on humanitarian grounds.

He said Prime Minister Sheikh Hasina suspended the conviction of Khaleda Zia on humanitarian grounds and allowed her to take treatment as per her choice at her residence.

The home minister said they will soon inform Khaleda Zia’s family that their application seeking permission to take her abroad for treatment has not been accepted.

The law ministry, in a press release on Sunday morning, said their recommendations issued by law minister Anisul Huq regarding Khaleda Zia’s treatment abroad were sent to the Home Ministry on the day.

On May 5 night, Khaleda Zia’s younger brother Shamim Eskander submitted an application to the home minister, seeking permission to send her abroad for better treatment.

After receiving the application, the home ministry forwarded it to the law ministry on the same night for its opinion.

Later, the suspension of her jail sentence was extended twice and the government issued separate notifications to this effect. As per condition of her release, Khaleda Zia will receive treatment at her home and she cannot go abroad during this period.

The BNP chief landed in jail on February 8, 2018 after a special court sentenced her to five years in prison in Zia Orphanage Trust corruption case. On October 30, 2018, the High Court increased her punishment to 10 years.

Khaleda Zia tested positive for Covid-19 on 11 April. Eight people at her residence were also found infected with the virus. She underwent the second corona test on April 24 and the report was positive again.

According to her physicians, the BNP chief was admitted to Evercare Hospital in the capital on 27 April for a brief period for a thorough health checkup, and she continued to remain there as per the doctors' recommendation. Later, she was shifted from the hospital cabin to the Coronary Care Unit (CCU) due to breathing problem.

Khaleda Zia finally tested negative for Covid-19, 27 days after she had been infected with the deadly virus.

However, the BNP secretary general, a couple of hours before the home minister’s briefing, at a virtual press conference said the BNP chairperson’s health condition was improving. “She has tested negative for corona and her condition is gradually improving,” he said.

Meanwhile, talking to news media, Khaleda’s lawyer Advocate Khandaker Mahbub Hossain said “Giving permission to Khaleda Zia for going abroad for treatment, the government only can give condition that she has to return after completing treatment. She will not be allowed to go abroad for treatment, it is totally unlawful.”