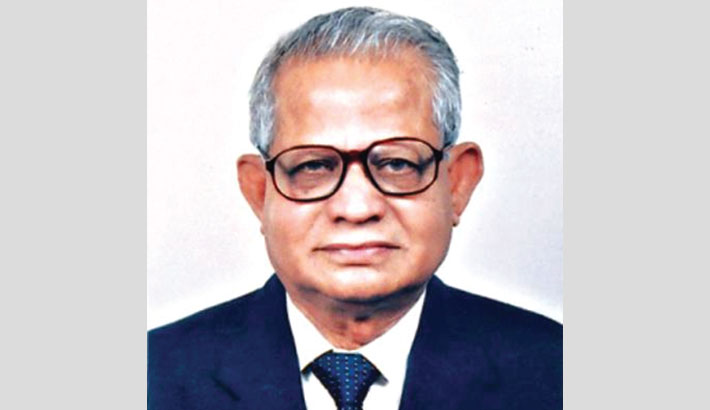 The Institute of Social Welfare and Research (ISWR) of the University of Dhaka has recently been ranked 66th among the top think tanks in South, Southeast Asia and the Pacific as per the report of The 2019 Global Go To Think Tank Index. The University of Pennsylvania has assessed this ranking on the basis, inter alia, of the impacts of research outputs of an organisation on public policy and of their contributions to the policymaking interface. The person who helped create this occasion to make all the students and teachers alike to be proud of this top-notch achievement of the institution was its founding Director Professor Md Abdul Momen.

Today (10 May) is the fifth death anniversary of Professor Momen who had introduced Social Work education in Bangladesh. In this ephemeral world, people are born, play their parts and pass away. Some, however, leave behind their indelible imprints and are eternally remembered for their works. Professor Momen was one of such gifted personalities to be recalled forever for his ideas and visions he espoused, the values and principles he set and the works he did. His roles in pioneering Social Work education, institutionalising the discipline, conducting quality researches and creating an effective alumni network would remain ever memorable.

Professor Momen did his Master’s in Social Work from Columbia University in the early 1960s. He was perhaps the first person from the then East Bengal to obtain a degree from the prestigious Columbia School of Social Work. He had got every reason not to return to Bangladesh having finished his study from that Ivy League University; however, he did come back. On return from the USA, he took the project to found an institution (to him, a research laboratory) for studying, analysing and catering to policy guidelines on cutting edge social issues. The institution was initially named the College of Social Welfare and Research and later renamed the Institute of Social Welfare and Research. Over the years, the institute has consummately contributed to formulating several policies, piloting many national-level projects and founding major NGO initiatives in Bangladesh. The recent recognition of the ISWR as a top research institute was long overdue of the laudable endeavours of Professor Momen for creating a launch pad for research and analysis.

Professor Momen dedicated more than fifty years of his life to institutionalise this new field of study - Social Work - in Bangladesh. In the profession, he was known for his unique style of teaching - full of life and knowledge. His distinct technique of deliberations had a natural demonstration of his thoughts and spirits to bring out the best of his students. Professor Momen had an extraordinary ability to articulate complex issues in a simple and understandable manner. To introduce professional applications of the discipline to the students, Professor Momen mapped out an idea of making fieldwork placement a mandatory requirement for any student to fulfil a Social Work degree. That was, to him, a gateway for the young students to the practical world. He used to physically visit the fieldwork places, talk to the Chief Executives of those institutions, attach the students with the grassroots and finally debrief them to benefit from those firsthand learning and experiences.

With his untiring efforts and continuing motivation, he groomed up a large pool of keen students equipped with a standard of excellence. A good number of his students, therefore, are found to hold the highest echelons of national life at any given time. To most of them, Professor Momen remains either a mentor or a guardian. Professor Momen was a successful organiser. He founded the Social Welfare Alumni Association that carries out his efforts of ensuring the welfare of all concerned by making a bridge between seniors and juniors. He utilised this extensive alumni network for doing many charitable works which are continued to date.

He had an esteemed family background. It will be remiss if we do not mention a fact. Many of us have read Shaheed Janani Jahanara Imam’s Ekattorer Dingulee (The Days of 1971), a masterpiece that vividly narrates the sacrifices and braveries of the best souls of the soil. In that memoir (p.162), we found a name - Dr M A Mobin who made an unmatched sacrifice for our great Liberation War. Dr Mobin was then doing FRCS in the UK. To protest the atrocities committed back home by the occupation forces, he with some others, first, set fire to their passports at Hyde Park in London. He then flew off to Bangladesh with a bare piece of paper (i.e. travel permit) as a ‘stateless person’ to join the Liberation War initially as a guerrilla fighter. Later, he with some fellow physicians established ‘Bangladesh Field Hospital’ in Agartala to treat wounded Muktijuddhas and refugees. This extraordinary freedom fighter happened to be the younger brother of Professor Momen. In the family of Professor Momen, there are a number of selfless persons imbued with utmost dedication for the nation, glittering in their respective fields.

Professor Momen was a champion change agent and the students who came in touch with him themselves also turned into change agents. In the ongoing Covid-19 pandemic, we have been passing through a trying time in living memory having unprecedented implications on economies, societies, values, norms, institutions, political structures and governance. While the entire world looks forward to getting rid of this deadly menace, more so for Bangladesh being a vulnerable country with a huge population yet scanty resources, we need more change agents now than ever to withstand this difficult time.

Professor Momen is no longer with us, yet, dwells in our hearts as a glowing light of truth, virtue and strength. With his passing away on this day in 2016, we have lost a treasure in the field. A pall of gloom and pain casts over us on this day as we miss him dearly. We solemnly pray to the Almighty for his salvation.