Desperate to go home despite lockdown 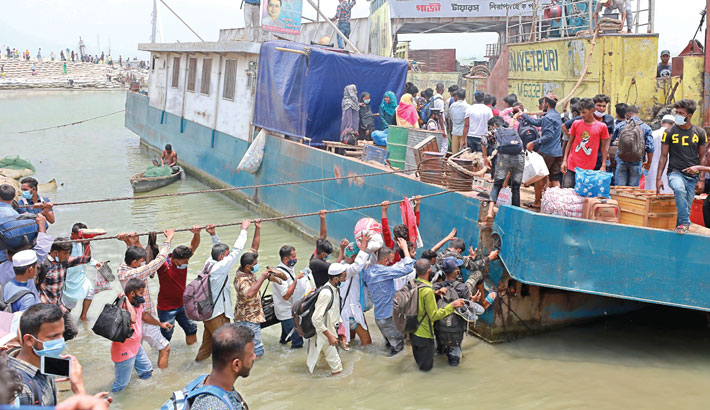 Desperate homebound people are seen boarding a ferry wading through water in a bid to cross the Padma River. The photo was taken from Shimulia of Munshiganj on Saturday. – SUN PHOTO

People continued to leave the capital in their thousands to celebrate Eid-ul-Fitr at their respective village homes ignoring government restrictions, posing the risk of spreading the coronavirus further.

However, people particularly bound for the south and southwester region received a blow after reaching ferry ghats as the authorities have suspended the ferry services on two major routes during the daytime to deter home-goers from rushing to their village homes.

On Friday night, Bangladesh Inland Water Transport Corporation (BIWTC) announced the suspension of daytime ferry services on Paturia-Daulatdia and Shimulia-Banglabazar routes from Saturday morning as per the government instructions to stop the mad rush of homebound people.

Ferries will operate only at night for carrying goods-laden vehicles.

Both the ferry ghat areas were crowded with people from Saturday morning.

The homebound people left Dhaka anticipating that they would be able to somehow board launches or ferries despite the government restrictions.

It was found that thousands of people gathered at the Shimulia Ghat disobeying the government instructions. There were crowds everywhere.

However, they were seen paying no heed to basic precautions, including wearing masks and maintaining social distancing.

People were found reaching Shimulia Ghat after walking 4-5 kms as their vehicles were intercepted by law enforcers at different points.

Some of the passengers said they did not know about the suspension of ferry services. The ferries were anchored in the middle of the river away from the ghat.

Many passengers said they came to know about the closure of the ferry services after reaching the ghat. They were unaware of the midnight announcement.

According to the ghat authorities, a ferry with seven ambulances arrived at Shimulia from Banglabazar around 8:15am. Immediately, passengers waiting at the ghat rushed to the ferry.

Despite repeated warnings, the crowd did not get off it. Later, the ferry was anchored near the ghat with this group of people. After some time, the ferry returned to the dock and dropped off the crowd.

At that time, the passengers became angry with the ghat authorities. At the advice of the authorities concerned, the ferry named Kunjalta was later loaded and sent to Banglabazar. Besides, two more ferries left the ghat with passengers after 12 noon.

Witnesses said ferry Kunjalta left the ghat with several thousand passengers. Hygiene rules were neglected as usual. With the suspension of public transport services, people reached the ghat with their families with difficulty. There is no way back now. Again, some people think that ferries will leave the ghat sometime and so they were staying in the ghat area.

“Many people were suffering due to the sudden decision to suspend the ferry services. We also suffered a lot. We came to the ghat spending Tk 300 per head. Now, we’re going back,” said a frustrated passenger.

Another passenger said, “They (authorities) decided to stop the ferry services during Sehri. Had it been announced in the evening, so many people would not have come here. However, there’s nothing to do now. “We’re going back.”

According to the local administration, there is no arrangement for crossing the Padma River. Launches, speedboats and trawlers are all off. The administration is keeping a watchful eye while patrol of naval police continues on the river.

There are members of Bangladesh Army, police and Border Guard Bangladesh at the ghat.

People who went to the ghat were being told to go back. While some have returned, most were still in the ghat area with a hope to cross the river somehow.

Meanwhile, due to the suspension of long-route public transport services, general people had to pay higher fares. Drivers of microbuses and CNG-run auto-rickshaws were charging Tk 200-300 per person from Dhaka to Shimulia. Motorbikes were charging up to Tk 500.

People also thronged the Paturia-Daulatdia ferry ghat, which is one of the main routes connecting 21 southwestern districts of the country with the capital.

Zillur Rahman, deputy general manager of BIWTC at Aricha, said, “Even though the ferry services were stopped, 2-3 ferries are being operated for the emergency crossing of some vehicles. Some passengers boarded a ferry while transporting an ambulance on Saturday morning.”

Meanwhile, a 20-km traffic jam was created on the Bangabandhu Bridge West Link Highway in Sirajganj as many chose vehicles for reaching their homes following the suspension of ferry services.

The traffic gridlock was reported from Bangabandhu Bridge west roundabout to Nalka of Kamarkhand upazila.

People travelling to northern districts were seen gathering at Gabtoli and Amin Bazar areas to board a vehicle for reaching as close to home as possible.

Private cars, microbuses and ridesharing bikes were seen picking up passengers at an increased fare from the Amin Bazar Bridge area for Savar and Aricha.