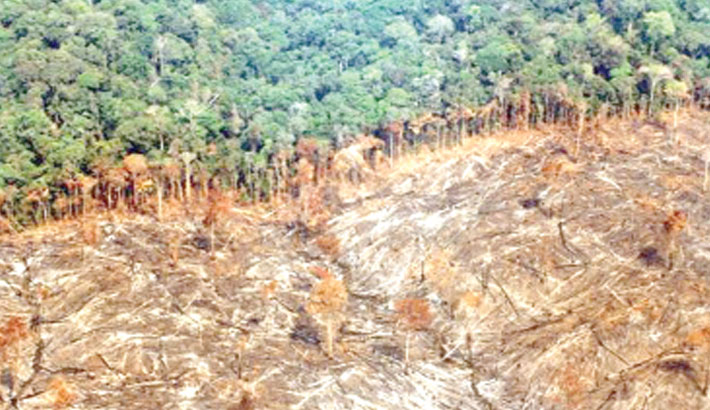 Deforestation of the Amazon rainforest in Brazil rose by 43 percent in April compared to the same month last year, government data has shown, reports BBC.

The Amazon is a vital carbon store that slows down the pace of global warming. Scientists say the loss of forest has accelerated since Brazilian President Jair Bolsonaro took office in 2019. The president has encouraged agricultural and mining activities in the world’s  largest rainforest, and rolled back environmental legislation.

Conservationists are fearing the worst ahead of this year’s dry season, when deforestation usually peaks from May to October.

In November last year the country’s space agency (Inpe) reported that deforestation of the Amazon had surged to its highest level since 2008.

In recent months, the international community - led by the US administration of President Joe Biden - has put greater pressure on Brazil to scale back deforestation of the Amazon. At a US-led climate summit last month, President Bolsonaro promised to double the money reserved for environmental enforcement and to end illegal deforestation by 2030. But critics have questioned his commitment to those pledges.

They have pointed to a recent cut to the environment ministry’s budget as an example of President Bolsonaro reneging on his promises.

They have also condemned proposed legislation that could legalise the private occupation of public land.

Next week, Brazil’s upper house of parliament - the Senate - is expected to vote on a bill, which critics say could accelerate deforestation in the Amazon.

A group of food businesses in the UK have threatened to stop sourcing products from Brazil if the bill is passed.

“The Amazon has become an open bar for land grabbers, illegal loggers and miners,” says Marcio Astrini, executive secretary of Observatorio do Clima, a campaign group.

“And several attempts are being made by the government and Congress to eliminate legal protection of forests, such as the amnesty for land grabbing and now the licensing bill.”