1,000 saplings to be planted at Suhrawardy Udyan 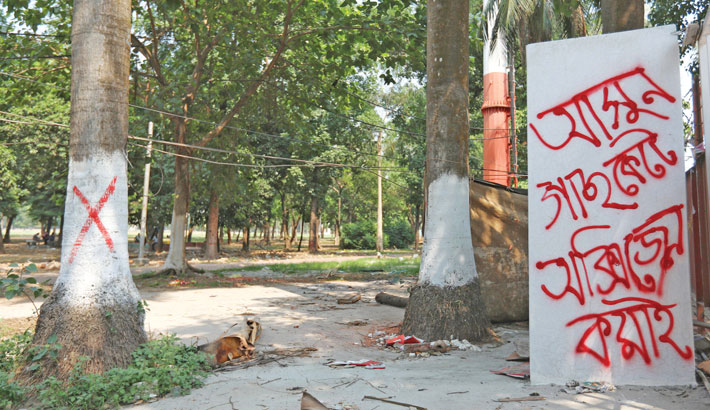 As part of a beautification project, several hundred trees at historic Suhrawardy Udyan have been cut down while some others marked for felling. Meanwhile, a poster hanged protesting the tree felling reads, “Let’s reduce oxygen cutting down trees.” The photo was taken on Saturday. —sun photo

Around 1,000 saplings will be planted at the historic Suhrawardy Udyan as part of a mega project to preserve the memories of the Liberation War, said Swadhinata Stambha construction (third phase) in Dhaka project director Md Habibul Islam.

“The mega project is being implemented to conserve the true history of the Liberation War and to build it as international standard under green shape which will be suitable for a modern city and attract the local and foreign tourists,” he said.

Habibul Islam, also a joint secretary of the government, said Shikha Chirantan, Swadhinata Stambha and underground Liberation War museum have already been constructed under the initiative of Liberation War Ministry to uphold the aspects of different movements and historical incidents in attaining the country’s independence to the new generation and the world community, reports BSS.

The project director said under a master plan, sculptures signifying the history of 23-year struggle of the Bangalee nation against the Pakistani rule and nine-month long Liberation War will be constructed.

Works are underway to construct Father of the Nation Bangabandhu Sheikh Mujibur Rahman’s sculpture at the place where he delivered his landmark March 7 speech, sculptures at the place where Pakistani occupation forces surrendered to liberation forces, Indira Mancha, underground parking space having a capacity of 500 car parking and children’s park there, he said.

“We want to build the entire Udyan as of international standard under a master plan,” he said.

Habibul Islam said Bangabandhu was first to plant tree sapling at the then Race Course ground and thus created the Udyan there.

He said Ziaur Rahman, who became the country’s president illegally, had established a children’s park covering 15 acres of land of the Udyan in 1979 to erase the memories of the venue where Bangabandhu delivered his historic March 7 speech and Pakistani occupation forces surrendered to liberation forces.

“Why environment activists didn’t raise any question at that time?” he posed a question.

He said confusion has been created among some people as different media reported partial and incomplete information over the cutting of some trees in implementing the project at Suhrawardy Udyan.

“A point is being repeatedly raised that restaurants are being built at the Udyan but no shop of bread or rice is being built.

Visitors can get tired while visiting the Udyan. They can be thirsty for water or need toilet facility. That is why seven food kiosks will be built there so that visitors can take rest and get water and light snacks. Separate toilets for male and female will be there,” he said.

The project director said the current environment at the Suhrawardy Udyan is not suitable and safe to visitors with family members due to the presence of vagabonds and wicked people there.

Around 1,000 saplings will be planted during the coming monsoon and tree plantation programme will be carried out in a planned way so that the flowers bloom in plants throughout the year by rotation to attract the visitors.