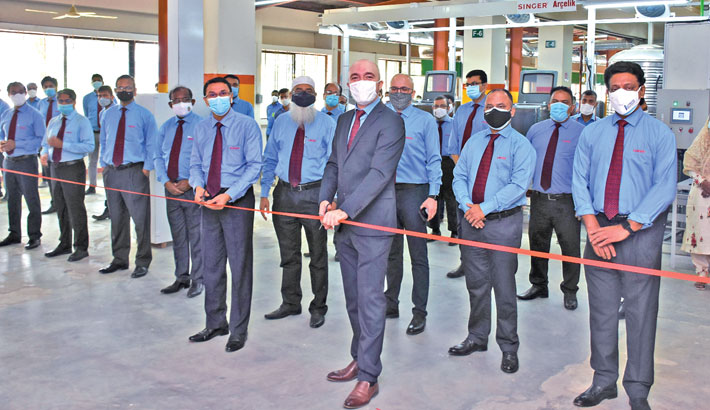 Singer Managing Director and CEO MHM Fairoz inaugurates the operation of washing machine production at the SINGER Manufacturing Plant in Savar on Thursday.

SINGER  will produce automatic front and top loading and semi-automatic washing machines at its own plant at Savar in Dhaka.

The production line has a capacity of producing four lakh and twenty thousand washing machines in a year, said a press release.

The formal operation of washing machine production line stared through a simple ceremony at the SINGER Manufacturing Plant on Thursday (May 6, 2021) in the presence of its

Director (Technology and Innovation) Hakan Altinisik   and other top officials of the company attended the ceremony.

On the occasion SINGER Chief Executive Officer & Managing Director MHM Fairoz said, ‘’Being the market leader in the Washing Machine category, we realized that with the significantly increasing concern among consumers about their health and hygiene, the demand of Washing Machine will be much higher in the days to come’’.