Padma Bridge and a PM Who Dares to Dream Big 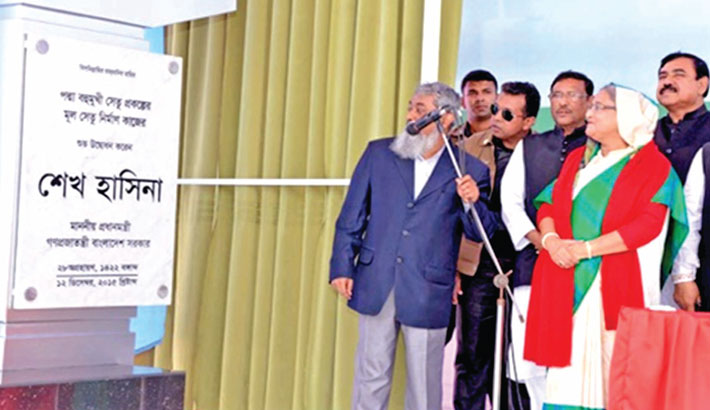 The bridge of our pride has become a reality due to our Prime Minister’s successful planning and bold position on the matter. Once operational, our national pride the Padma Bridge will be the 11th longest in the world. Prime Minister Sheikh Hasina put an end to all speculations by informing the world that the Padma Bridge will be constructed with our own funds. It was a firm step towards the fulfillment of a long cherished dream. On September 30, 2016, the 1st span was placed on piers 37th and 38th. Mammoth tasks started on the two banks of the Padma River. The forty-one spanned 6.15 km long Padma Bridge is a reality today.

Bangladesh is developing in various directions like infrastructure, agriculture, health, communication technology, which will change the horizon of the country. The Padma Multipurpose Bridge will change not only the south-western region but the entire economy of Bangladesh. The task of building such a bridge at own expense was not easy as for many years our communication was river dependent. After gaining independence in 1971, road communications started gaining importance in Bangladesh. The huge rivers became major obstructions on the building of our highways. Ferries had to be used on many highways to cross the rivers. People from the north could never imagine that one day they can reach Dhaka by noon starting from home in the morning.

The Bangabandhu Bridge was inaugurated on June 23, 1998 on the Jamuna. At that time, an initiative was taken to build a bridge over the Padma to facilitate communication with the south-western part of the country. Based on feasibility studies by Japan International Cooperation Agency (JICA), the government announced in July 2004 that the Padma Bridge will be built between Mawa and Jajira point. The final design of the 6.15 km bridge facilitated both rail and road, which was unprecedented. As this will be part of the Trans-Asian Railway route, freight trains may run more than passenger trains, a two-story bridge was designed considering the future.

At the outset, the Asian Development Bank (ADB) pledged support to the Padma Bridge. The World Bank wanted to be the key donor. JICA and the Islamic Development Bank were also in line to assist in the Padma Bridge. Proposals were sought for the construction of the main bridge. However, the World Bank withdrew from the 1.20 billion pledge, though the late Professor Jamilur Reza Chowdhury, as a member of the expert committee said that there were no irregularities. One by one, ADB, JICA and IDB also moved away from helping us. After that indecision continued for some time till the government's conviction to build a bridge with its own fund reverberated in the country. The Prime Minister asked experts whether they will be able to supervise the construction of the bridge which will be built with the country's own effort. The country’s experts suggested that the roads connecting the two banks can be done by engaging the army if necessary, but the river management and the main bridge construction will be difficult. Thus, in compliance with international norms for such work, international contractors were hired for construction of the Bridge and for the river management. On December 12, 2015 the Prime Minister formally inaugurated the project and since then the work continued swiftly.

The first challenge faced was managing the combined flow of the Padma-Jamuna. On an average, every second 1 lakh 40 thousand cubic meters of water flows at Mawa point. Another big issue was the bottom of the river and how it will look like in the next one hundred years. Also the effects of earthquakes were considered. Another challenge was guiding the river’s course. To meet multiple challenges successfully, the Padma Bridge is a little curved which is a structural phenomenon.

After achieving the Millennium Development Goals (MDGs) in 2015, Bangladesh is working towards fulfilling the Sustainable Development Goals (SDGs) by 2030 and aspiring to become a developed country by 2041. Studies show reliable infrastructure development is key to positive economic growth by improving competitiveness and enhancing productive capacity of a country through gross domestic capital formation, employment generation, development of human capital and trade. There is ample evidence that infrastructure and output are mutually beneficial, as infrastructure boosts output and higher output leads to better infrastructure. The Padma Bridge is estimated to increase the GDP of the country by more than one per cent.

This long-awaited bridge carries significance on several accounts. Despite the abundance of agricultural products in the southern part of the country, the region is suffering from improper marketing. Once this bridge is completed it will change the lives of the people of the south-west, as their products will reach Dhaka and other parts of the country easily. Farmers will have the opportunity to sell their products at the right price. It will benefit about three crore people across 21 south-western districts of Bangladesh through better connectivity with growth centres, creating more opportunities for employment and income generation. The supply chain will improve as the transportation ease will enable people, goods and services to move swiftly to their destinations. The south-western parts of the country will also have better access to education, healthcare and other services. The rural economy will be transformed as people can move to urban areas easily and opportunities will also come to the rural areas.

This bridge will be the first integrated communication system in Bangladesh. Road communication will be swifter between Mongla Port and Benapole Land Port with the Capital and the port city Chittagong. A rate of return of 12 per cent on investment is considered ideal, but after this bridge is built 19 per cent annual investment return will come easily. Within 31 years of construction of the Bridge, GDP will grow by 6,000 million and annual returns will reach 300 million after 2032. The bridge will play a huge role in all sectors of the economy - agriculture, industry, economy, education and trade. There is a likelihood of a modern city coming up on both sides of the Padma, keeping the bridge at the heart, like Singapore and Shanghai, which may add a new dimension to tourism with modern hotels and resorts.

According to estimates by various international donors, the Padma Bridge will contribute to the country's 1.9 percent annual poverty reduction. Within 31 years of the construction of the Padma Bridge, GDP will grow by 6,000 million and annual returns will reach 300 million after 2032.  The communication with the 19 coastal districts of the south-west, will be strengthened in the east. Agriculture, communication, industrialization, urbanization and living standards of the region will increase which will lead to the overall development of the country. Connecting routes with BCIM (Bangladesh, China, India and Myanmar) will increase international connectivity. As a result of controlling the river course, 9,000 hectares are being freed from river erosion. Besides, millions of people will be saved from floods. There will be no need for a 50 per cent subsidised ferry service to maintain uninterrupted communication with the southern part of the country. People and products can be transported saving time and money. The government's revenue will increase by about 4,000 million US dollars every year. Massive industrialisation and urbanisation will take place on both sides of the bridge which will keep the wheel of the country's economy moving.

According to a study by South Asian Network on Economic Modeling, the bridge will boost the country's Gross Domestic Product (GDP) by 1.23 per cent. The survey did not address rail connectivity. The bridge will bring additional benefits as the railway will be installed. According to the survey by IMED in May 2019, 650 people from different walks of life in Madaripur, Shariatpur and Munshiganj were interviewed. 95 per cent of whom said that if the Padma Bridge is opened, transportation of agricultural products will be easier and at the same time they will receive due cost. According to Road Transport and Bridges Minister Obaidul Quader, the construction of the main bridge is 93.25 per cent completed so far with the installation of the last girder on the viaduct at Mawa end in Munshiganj. River training work progress is 83 per cent and the overall project progress reached 85.5 per cent. The Minister hoped Padma Bridge will be opened for vehicular movement in June, 2022 positively.

Bangladesh's economic potential has become credible all over the world due to the bold decision to implement a mega project like the Padma Bridge at own expense. Bangladesh undertook such an expensive project due to the courageous initiative and determination of the most successful Prime Minister of Bangladesh, Sheikh Hasina. This confident landmark decision has elevated Prime Minister Sheikh Hasina as a determined, successful leader of great dignity all over the world. This difficult mega project has been possible only because of the farsighted, realistic and successful leadership of Prime Minister Sheikh Hasina. The 41 spans of the bridge are the result of her vision and able guidance putting Bangladesh steadfastly on the highway of development. At this pace, Bangladesh will soon be the “Golden Bengal” visualised by Father of the Nation Bangabandhu Sheikh Mujibur Rahman.

The writer is an army officer in the Corp of Engineers