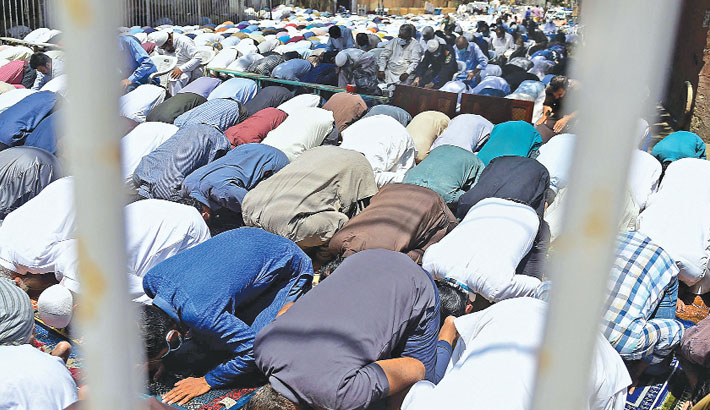 Muslim devotees offer prayers on the last Friday of the holy month of Ramadan on a street ahead of the Eid al-Fitr in Karachi, Sindh province, Pakistan, on Friday. —AFP Photo

RAWALPINDI: Schools and restaurants have closed, shops pull down their shutters early every evening, and the military has been mobilised to combat the spread of coronavirus — but night after night the faithful flock to mosques across Pakistan for prayers.

Anxious over the virus’s deadly rampage through neighbouring India, officials have steadily tightened restrictions and banned travel during the upcoming Eid holiday, which marks the end of the holy month of Ramadan, reports AFP.

But they have turned a blind eye to religious gatherings, fearing a crackdown could ignite widespread confrontation in the deeply conservative Islamic republic.

“There is so much concern about backlash from religious groups,” said Saeedullah Shah, a doctor with the Pakistan Islamic Medical Association Covid-19 task force.

“It’s a very weak government,” he told AFP. “Everything is half-hearted.” Pakistan has recorded more than 840,000 cases and 18,500 deaths, but with limited testing and a ramshackle health sector, many fear the true extent of the disease is much worse.

Covid wards in several cities have been full or close to capacity for weeks as a more contagious variant of the virus has pushed cases to record numbers.

But even as the government pleads with the public to follow “standard operating procedures”, as the virus guidelines are popularly known nationally, mosques are almost another country.

Attendance for daily prayers rises during Ramadan, especially in the evenings after fasting ends and during Friday afternoon sermons known as “jumah”.

Mosques across Pakistan were brimming with people on Friday afternoon — the last jumah prayers before the Eid holidays.

Maulana Muhammad Iqbal Rizvi — who oversees the historic Markazi Jamia mosque in the garrison city of Rawalpindi — said the faithful had little to fear, and dismissed comparisons to India.

“Our prayers are different,” he said, and insisted restrictions were enforced — at least under his watch.

“They are non-believers and we are Muslims. Repenting to Allah is our faith; they don’t repent, that’s the reason,” he told AFP.

That sentiment permeates all levels of society, with Prime Minister Imran Khan saying Thursday: “In India, people are dying on streets... Allah has been kind to us compared to the rest of the world.”

Still, he urged caution, adding: “Next two weeks are very important for us, we have to bring corona cases down.”

Earlier this week Shiite Muslims gathered across the country to mark the anniversary of the martyrdom of Imam Ali, one of Prophet Muhammad’s companions.

At a rally in the capital, initial caution gave way to emotion as masks were removed and participants dressed in black chanted songs and beat their chests in tight crowds.

Thousands also gathered in the eastern city of Lahore, with the most demonstratively pious flagellating themselves and whipping their backs raw.

“We are ready to sacrifice our lives, children and families,” Haji Shahzad Jaffry told AFP.

“The disease has been around for the last year, but those who have been against our gathering and mourning have been doing it for the past 1,400 years.”

Health experts in India say religious gatherings there have been a major contributor to what has become one of the world’s worst outbreaks.

But that has not spurred changes in policy or behaviour in Pakistan.

Ashfaq Ahmed, who recently returned to Pakistan from Britain, said he was shocked when he saw crowds pressed into mosques and paying little concern to basic precautions such as social distancing.

Despite the evidence, Pakistani officials insist guidelines are being followed.

“If there is one place where Covid-19 guidelines are being followed that is at the mosques,” said Imran Siddiqui, a spokesman for the ministry of religious affairs.

“I can take you to a market and then to a close-by mosque and you can see it yourself that people at mosques are better at complying with safety measures.”

Still, according to a poll published by Gallup Pakistan this week, 64 percent of people believe coronavirus is not as dangerous as it is made out to be.

Despite the warnings — and mounting death toll — the faithful continue to flock to prayer.

“God is kind to us,” said Sohail Arshad at the Markazi Jamia Mosque in Rawalpindi.

“If he has sent the disease he is the one who will cure us.”