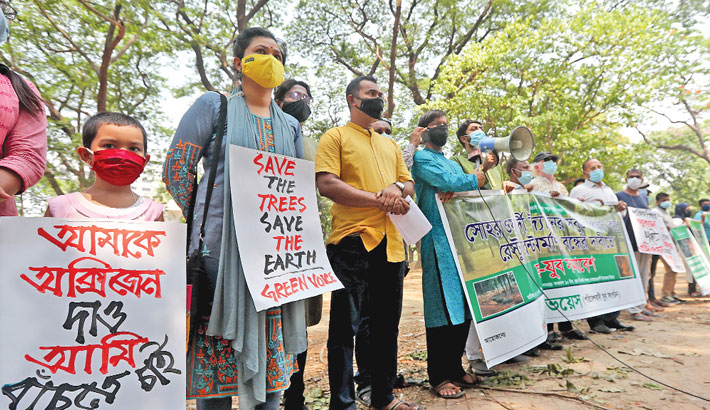 Holding different banners that read ‘Give Me Oxygen, I Want to Live’, and ‘Save the Trees, Save the Earth’ etc, environmental activists stage a demonstration at Suhrawardy Udyan in the capital on Friday, protesting against tree felling at the historic site. —SUN photo

People from different quarters are continuing protests against felling trees at historic Suhrawardy Udyan in the capital.

Several organisations staged protests at the park on Friday, demanding the immediate cancellation of the development plan which is leading to deforestation of the historic park.

It said there had been violations of the law on protecting the environment and the character of the park was changed to give it a corporate shape.

The government should have consulted with urban planners, architects and designers before taking such environmentally critical development project, said a statement signed by BIP General Secretary Adil Mohammed Khan.

Speakers at the programme said several hundred trees were felled to construct restaurants in the place of many memories of liberation war. Land grabbers continue to design evil plan to grab the historic park and a large part of the park is already under them.

They also said that the park is the breathing place for city dwellers and ‘the lung’ of Dhaka is being destructed in the lame excuse of constructing eateries.

They sought exemplary punishment for the people involved in the decimation to the oxygen bank of Dhaka.

Under the banner of the organisation, Architect Iqbal Habib, General Secretary of Nagorik Songhoti Sharifuzzaman Sharif, founder of Green Savers Ahsan Roni and others spoke on the occasion.

Some university teachers, writers, poets and cultural activists formed a human chain at Suhrawardy Udyan with the same demand.

Speaking on the occasion, film producer Junaid Halim said, “The park is one of the main places where there have many memoires of our liberation war. The historic March 7 speech and the surrender of Pakistani army are among other historic events which occurred in the park. Bangabandhu planted saplings in the park and named it Suhrawardy Udyan.”

He said that they won’t allow anyone to use the park for luxury and demanded to plant some 10,000 saplings against felling trees.

The Ministry of Liberation War Affairs and the Ministry of Housing and Public Works are jointly implementing a development project in the park titled “Construction of Swadhinata Stambha at Suhrawardy Udayn, Dhaka (3rd Phase).

Under the project, the government is building seven restaurants and 6.5 kilometres walkway by felling several hundred trees that bear many historic memories.