Billions of cicadas to emerge after 17 years underground 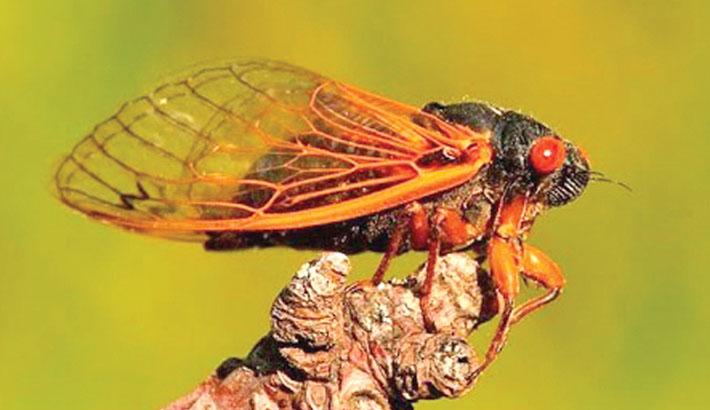 WASHINGTON: Some are waiting for their arrival with trepidation, others are curious what they might taste like: Americans are swapping tips on how best to weather the storm when billions of cicadas soon emerge after 17 years underground.

Before invading parks and people’s gardens, the insects have already conquered the airwaves, social media and newspapers, especially in parts of the eastern, central and southern United States where “Brood X” is due to emerge, reports AFP.

Billions of cicada nymphs that have been living underground since 2004 will burst out of the soil, shed their skin, mate, lay eggs and then die, all against the backdrop of the deafening noise that males make to attract females.

The last time they emerged, George W Bush was the US president, Facebook had just been created and Athens was getting ready to host the Summer Olympics.

Hard to say, as it depends to some extent on weather conditions, and in particular the temperature of the soil. Expected cooler temperatures could delay their emergence until mid-May — or they could pop up any day now.

Residents have been watching for signs of their arrival for weeks, sharing photos of the tunnels the cicadas have dug to make their way to the surface when ready to briefly face the world.

Tim Pfeiffer has taken to tweeting about the insects. The 28-year-old, who lives in the Washington suburb of Silver Spring, Maryland posted videos of a few bugs that had appeared ahead of the swarm and were crawling on his porch.

He told AFP he was “more anxious than excited” and admitted that cicadas “are kind of gross as nymphs.”

“But watching some of them morph into the adult form in under an hour is fascinating,” he said.

On the neighborhood email network Nextdoor, there are more and more comments about the looming bug invasion, including how best to deal with the flying critters.

“Get a face shield, wear a cap, carry a fly swatter, keep your windows up while driving,” advised one person.

Another user had the following advice for cyclists: “Pedal slow and use wide tires, those squished cicadas on the bike trail are mighty slick.”

It is important to remember that cicadas pose no real threat to humans, except for the high annoyance factor — and the even higher gross-out potential. They also don’t damage most plants or trees.

For those who want to document the 2021 arrival, an app called Cicada Safari allows users to mark on a map where the insects have been spotted, with supporting photos.

For more adventurous souls who have been wondering what the bugs might taste like, the biologist Jenna Jadin posted a number of recipes online back in 2004, when the last batch emerged fresh from the ground.

Ranging from cicadas with mushrooms or with chocolate, there is something for everyone’s palate. Or at least, for those happy to eat bugs