DSCC, DNCC to take over the project 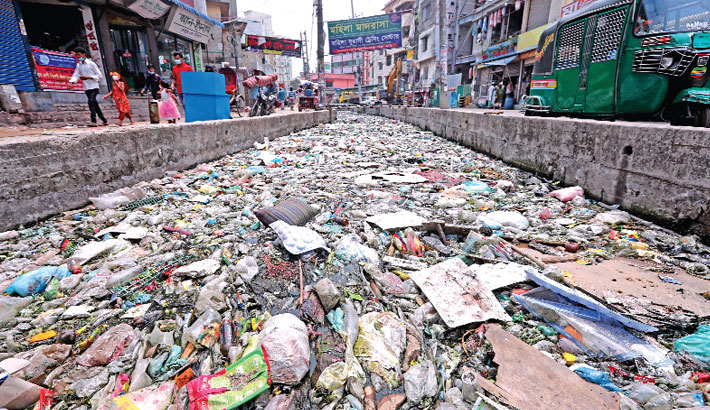 In this portion of the Kutubkhali canal in Jatrabari area of the capital, not a single drop of water can be seen due to the piles of garbage that remained there for long. The photo was taken on Friday. —sun photo

The land acquisition and re-excavation project for Hazaribagh, Baishteki, Kurmitola, Begunbari and Manda Khal in the capital is in limbo due to the negligence of the authorities concerned.

The Tk 6.45 billion project, taken up for efficient extraction of rain and household water to rivers through the canal to address the city’s waterlogging problem, has progressed only seven per cent in the last three years. The Tk 6.45 billion remains stalled now.

Documents say that Dhaka Water Supply and Sewerage Authority (WASA) has been implementing the project since April 2018 and it was supposed to be completed by December 2019. The project timeframe was later extended until December 2022.

It has been learnt that the project has seen only seven per cent progress physical progress around six per cent financial progress.

Sources said the project could not complete the land acquisition for the five canals in the last three years and there is uncertainty over the re-excavation of the canals.

Former director of the project, Abdul Waset said, “Under the project, a total 13.5 acres land was acquired for two canals while the land acquisition process for the rest of the three canals is yet to be finished.”

“We could not settle how much land we will require for the total project,” he added.

On December 31, DSCC and DNCC formally took over the management and maintenance responsibilities of 26 canals and 10 kilometres of box culverts from Dhaka WASA to solve the water-logging problem of the capital as WASA was failing over and over again.

An engineer of Dhaka WASA, wishing anonymity said, “DSCC and DNCC will prepare separate development project proposal to move ahead with the canal development work.”