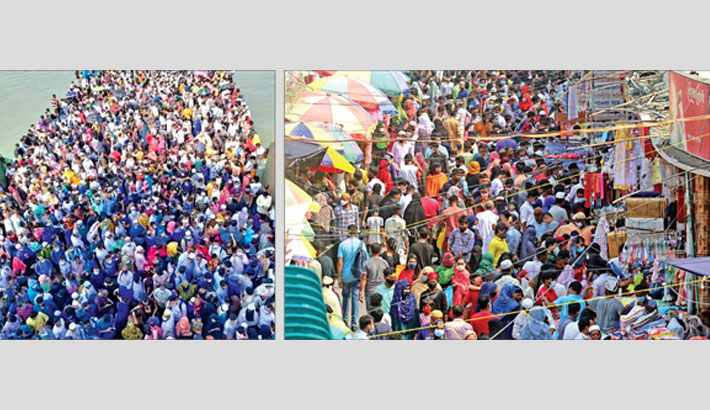 People in their thousands are leaving the capital for their village home by any means and thronging markets without paying any heed to safety protocols. An overcrowded ferry is seen heading towards Kathalbari Ghat from Mawa (left). People are seen completing their Eid shopping at New Market in the capital (right). These photos were taken on Friday. – SUN PHOTO

Despite the ongoing countrywide lockdown, all the markets and shopping malls in the capital witnessed huge crowd while homebound people swarmed onto roads and ferry ghats in violation of health guidelines.

With the Eid-ul-Fitr drawing nearer, people in their thousands left the capital on Friday to go home to celebrate Eid amid the lockdown enforced to check the spread of coronavirus.

Shopping centres, roads and ferry ghats saw huge crowd, but people were least bothered about health guidelines as they were not seen wearing face masks and maintaining social distancing, many said.

The number of small vehicles, mostly private cars and microbuses increased manifold at Shimulia ferry ghat in Munshiganj and Paturia ferry terminal in Manikganj, the gateway to 21 districts of the country’s southern region.

A large number of vehicles and goods-laden trucks were stuck in a tailback at both the terminals on Friday morning.

Currently, three out of 16 ferries are in operation on Paturia-Daulatdia route.

A total of 300 hundred vehicles, both small and big ones, were waiting to cross the Padma river, the BIWTA official added. 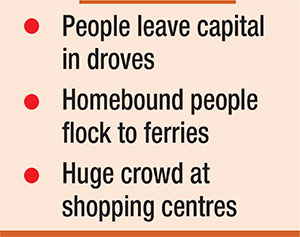 Besides, homebound people were crowding Shimulia ferry ghat in Munshiganj.

Thousands of people were seen travelling to southern parts. Most of them were not maintaining health guidelines while crossing the Padma river through the Shimulia river channel.

Unable to handle the rush of passengers, some ferries departed without a single vehicle on board and as a result, over one thousand private vehicles and trucks got stuck in the port area.

Though long-haul passenger buses are not allowed to operate during the lockdown, people can travel by bus within their own districts.

People are also traveling in smaller transport like trucks or pick-ups, to make their way from Dhaka to Shimulia to cross the Padma to head home to the southern districts.

Services of all the 87 launches on this river route have remained suspended due to the lockdown, BIWTC official Shafiqul Islam said. About 450 speedboats and several hundred trawlers have also halted operations since the speedboat accident in Madaripur’s Shibchar.

Meanwhile, as soon as the shopping malls opened on Friday last, shoppers in large number flocked different markets and shopping centres in the capital.

Though most of customers and traders were wearing face masks, but they were not seen maintaining physical distancing.

People without face masks were also found on footpaths, on buses, shopping malls and kitchen markets in the capital and elsewhere in the country.

People are still gathering around tea stalls at street corners, shopping malls, in the capital and elsewhere in the country as they are not giving a damn about the health guidelines.

According to global and national health experts, maintaining social distancing is very important and easiest way to stay safe from the deadly cornavirus or Covid-19.