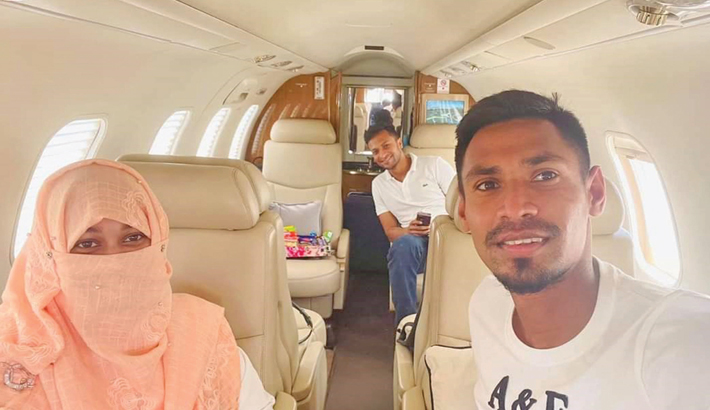 Bangladesh all-rounder Shakib Al Hasan and pace bowler Mustafizur Rahman along with his wife returned home from India on Thursday after taking part in the Indian Premier League.

Shakib and Mustafizur, who represented Kolkata Knight Riders and Rajasthan Royals respectively in the 14th edition of the cash-rich competition, were expected to arrive on May 19 and join the team after completing three-day quarantine for the three-match ODI series against Sri Lanka, scheduled to start from May 23.

However, following the suspension of IPL 2021, Shakib and Mustafizur reached Dhaka early through a special arrangement as all air travel was suspended between India and Bangladesh.

Shakib went straight to Hotel Four Points by Sheraton while Mustafizur and his wife went to Pan Pacific Sonargaon Dhaka Hotel after arriving at Hazrat Shahjalal International Airport on Thursday afternoon and they will complete a 14-day mandatory institutional quarantine over there. “Alhamdulillah, we are safely back in Bangladesh without any trouble. I would like to thank Rajasthan Royals and Kolkata Knight Riders franchises for making it happen. I would also like to thank our health ministry for it's contribution,” Mustafizur wrote in his official Facebook page.

Mustafizur, on the other hand, was part of all seven matches of Rajasthan and took eight wickets for his side.

Both the players are expected to join the national team just before the ODI series only if they come out Covid-19 negative in multiple tests over the next few weeks.