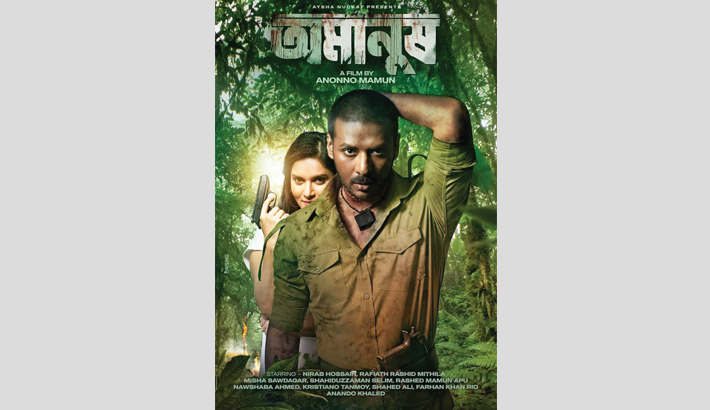 The first-look poster of Anonno Mamun’s next directorial venture ‘Omanush’ was unveiled on   Wednesday. The poster goes viral immediate after its release and got quite the reception on social media.

And, it can be simply predicted from the poster that ‘Omanush’ is going to get a good response from the audience as well as have a decent shot at the box-office.

‘Omanush’, which casts Nirab Hossain and Rafiath Rashid Mithila in the lead roles, is expected to have its release after Eid-ul-Azha.

‘Omanush’ is a tragedy genre movie. Nirab will play the role of a dacoit named Usman and Mithila will be seen as Nudrat in the movie.

About the film, Annono Mamun said, “The first look poster of ‘Omanush’ was unveiled on Wednesday. Initially we have released the first poster of it and gradually we will release other posters of the film. Now, I will not say anything about the story of the film but I can say the film will be accepted by the audience.”

“Ninety percent shooting of the film has been completed before the start of ongoing lockdown. After lockdown, we will start work for the movie as soon as possible. We have a plan to release the film on the occasion Eid-ul-Azha both on theatre and OTT platforms,” he added.

Nirab said, “This is my second film with Anonno Mamun after ‘Kasai’. In one word the story of ‘Amanush’ is outstanding. It is a contemporary and different type of movie. I hope ‘Amanush’ will be a good film.”

To note: Mithila is going to make her silver screen debut through the movie. She has paired up with Nirab after a 15-year hiatus. Earlier, the duo paired up in an advertisement in 2006.