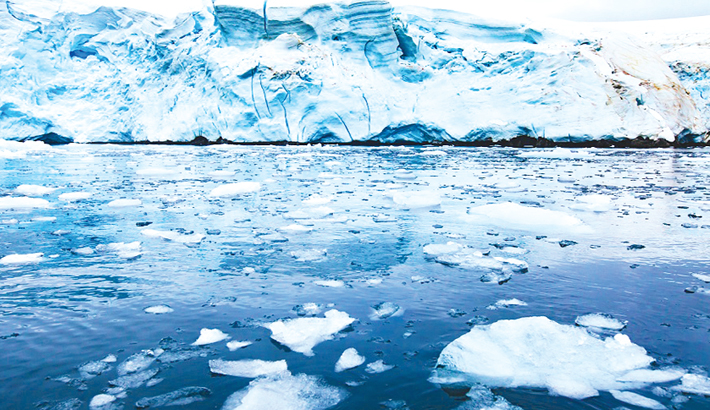 Antarctic melting could cause a “dramatic” rise in sea levels if countries fail to keep global warming below 2 degrees Celsius (3.6 Fahrenheit), posing a serious threat to low-lying and coastal regions, researchers said on Wednesday, reports Reuters.

If the upper temperature goal set in the Paris Agreement is exceeded, the melting Antarctic ice sheet could cause annual average sea-level rise of 0.07 inches (0.18 cm) globally in 2060 and beyond, said the study published in the journal Nature. Under the 2015 Paris Agreement, more than 190 countries agreed to hold global average temperature rise to “well below” 2C above pre-industrial times and strive for a limit of 1.5C.

Warming of 3C - a scenario that is more consistent with current policies - would push sea levels up by a “catastrophic” 0.2 inches per year globally after 2060, the study added.

“Ice-sheet collapse is irreversible over thousands of years, and if the Antarctic ice sheet becomes unstable, it could continue to retreat for centuries,” said co-author Daniel M Gilford of the Rutgers Earth System Science & Policy Lab.

“That’s regardless of whether emissions mitigation strategies such as removing carbon dioxide from the atmosphere are employed,” he added in a statement.

Low-lying nations like Bangladesh, which already suffers from extreme storms and floods, are most vulnerable to the impacts of rising temperatures and sea levels, said Atiq Rahman, head of the nonprofit Bangladesh Centre for Advanced Studies.

In Bangladesh’s flat southern area, “a little increase in sea level transfers into a much bigger linear or horizontal increase of land cover by saltwater,” explained Rahman, who was not involved in the study.

“Gradually, those who are now in (areas of) brackish water, which is saltwater plus fresh water, (their land) will become saline and their agricultural productivity will decrease.”

The result will be higher displacement, with people forced to move to urban areas already struggling to accommodate growing populations, where many will lead a poorer quality of life away from their families, Rahman said.

Coastal communities are seeking to cope through simple measures like growing vegetables in pots away from saltwater, he noted. “People are trying to adapt, but adaptation has limits,” he added.

A study published by the American Geophysical Union, an international scientific group, last month predicted that rising seas could trigger waves of migration across Bangladesh, affecting more than 1.3 million people by 2050.

Both Gilford and Rahman stressed the need for greater international efforts to tackle rising global temperatures, ahead of the COP 26 UN climate talks in November.

“The only serious response from the global community is rapid decrease in greenhouse gas emissions,” said Rahman.