Govt may give permission for her treatment abroad 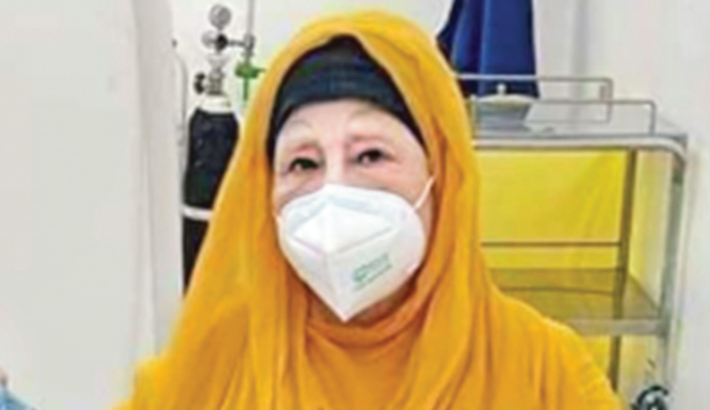 Ailing Bangladesh Nationalist Party (BNP) Chairperson Khaleda Zia is likely to be taken to London soon for treatment as she is going to ‘get permission’ from the government to this end.

Talking to reporters at his city residence, Law Minister Anisul Huq on Thursday said the government will decide on the application seeking permission for taking the BNP chief abroad for treatment as soon as possible.

He also said there is no function of the judiciary in his regard as the former prime minister’s conviction was relaxed through an executive order. “Her conviction was suspended under section 401 of the Code of Criminal Procedure with two conditions…. now it’ll have to be seen whether there’s any scope of revising it,” he said.

The law minister further said the implementation of the section 401 has already been done while they need to see how the conditions will be reviewed.

The BNP chairperson’s family submitted an application to home ministry on Wednesday evening seeking permission for taking her abroad for treatment.

After receiving the application, the home minister at a press conference at his residence said he had already forwarded the family’s application to the law ministry for review.

Speaking at a programme on Thursday, BNP Secretary General Mirza Fakhrul Islam Alamgir said Khaleda’s family has sought the permission for taking her abroad for better treatment as she has been suffering from some post-Covid complications. “We hope that the government will allow her to take treatment abroad on humanitarian grounds,” he said.

The 10-member medical board of Evercare Hospital Dhaka where Khaleda has been undergoing treatment on Wednesday evening informed her party and the family that she needs to be taken abroad for better treatment, the party sources said.

The medical board held an emergency meeting on Thursday noon and discussed Khaleda’s condition and gave necessary advice. Fakhrul was also present at the meeting.

Meanwhile, the BNP chief has tested negative for Covid-19 after 26 days of being diagnosed with the disease. She underwent the test for the third time on Wednesday and the result came back negative on Thursday morning, the sources added.

BNP will hold special prayers across the country on Friday seeking immediate recovery of its chairperson.

A BNP leader claimed that they have got verbal permission from the government to take Khaleda abroad for better treatment and they are just waiting for formal permission.

He said after getting green signal from the government, the BNP chief’s family applied seeking permission.

Family sources said they have already taken all necessary preparations to take Khaleda abroad while they are collecting her passport and other necessary documents to this end.

Though fingerprints and the signature of the applicant are mandatory for the passport as per the rules, the condition has been relaxed in case of the BNP chairperson and she is going to get the MRP as soon as possible, party sources claimed. Her previous passport expired in 2019.

Talking to the Daily Sun, a BNP leader said it will take a few days to take Khaleda abroad as there are some procedures to be completed after getting formal permission from the government.

BNP sources said Khaleda will be taken to London, where her elder son and acting BNP Chairman Tarique Rahman along with his wife and daughter and her younger son’s wife and daughters have been staying, for treatment.

The BNP chief went to London on July 16, 2016 for medical treatment.

Although she was supposed to return home within a month, her return was delayed and she finally came back on October 16 of the same year.