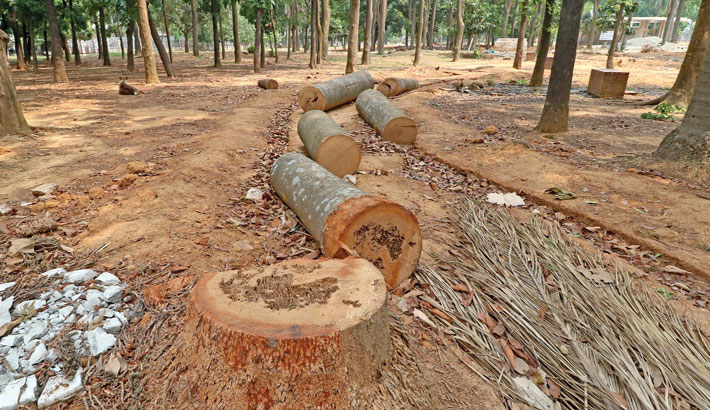 Historic Suhrawardy Udyan is considered one of the oxygen banks of the capital. However, several hundred trees have been felled to pave the way for constructing restaurants. The photo was taken on Wednesday. – Md nasir uddin

The Suhrawardy Udyan in the capital, which bears the country’s glorious history, is losing its original look as the authorities are felling trees of the park in the name of its beatification.

Several hundred old trees, a witness to many historic events of the country, have already been felled to clear the way for building some concrete structures under a beautification project.

The Ministry of Liberation War Affairs and the Ministry of Housing and Public Works are jointly implementing a development project in the park tilted “Construction of Swadhinata Stambha at Suhrawardy Udayn, Dhaka (3rd Phase).

Under the project, the government will construct around 6.5km walkway and seven food courts around the historic park in the name of its beautification and environmental development.

During a recent visit to Suhrawardy Udyan, this correspondent saw that a large number of old trees have been felled and many logs have been piled up in the historic park.

Some concrete structures are being built and the construction work of a walkway is going on circling the park. Many signboards have also been erected in different parts of the park which read, “Work of planned greenery and environmental development is going on.”

Meanwhile, the felling of old trees of the park has created uproar among the environmentalists and regular visitors of the park, including students of Dhaka University.

Asked about the felling of trees, Engineer of Public Works Department Mohammad Firoz said trees are being felled to implement a project of the Liberation Affairs Ministry. He, however, did not give further details of the project.

Contacted, Kamrul Islam, General Manger of National Development Engineering, said, “We are not felling trees. It is the duty of the Public Works Department. We’re constructing walkway and food courts under the development project.”

“The trees of the park had been in an unplanned way, which is creating visual impediment. The government has accepted ‘Udyan Concept’ which ensures distance vision and it is carrying out  development work of the park with the concept,” he added.

Kamrul Islam said after competition of the project, the government will plant saplings in the park in a planned way.

‘Solo Ana Bengali’ and ‘Nongor Bangladesh’, two voluntary organisations, formed a human chain on Wednesday protesting the destruction of the sanctuary of birds and other animals at Suhrawardhy Udyan.

Pavel Partha, an environmental activist, said, “In the name of development, the government is destroying the historic park, a safe haven for various species of birds and animals. The authorities are making eateries in the park for human being, endangering the existence of birds and other animals.”

Mintu Rizvi, another environmental activist said, “The government is making commercial eateries by felling old tall trees which bear the memory of many country’s historic events, including Bangabandhu’s 7th  March speech  and  the surrender of Pakistani army to the liberation forces. We demand that the authorities stop cutting trees,”

He also urged the government to make development plan without destroying trees like many countries are doing.

Muhammad Ariful Islam, vice-president of Bangladesh Institute of Planners, said, “Ramna Park and Suhrawardy Udyan are our pride and they are the ‘lungs’ of Dhaka city.”

“We cannot create a single park like this after 50 years of our independence.  Felling trees of the park for making commercial eateries will create environmental hazard in Dhaka.”