We are far behind foreigners: Ziarul 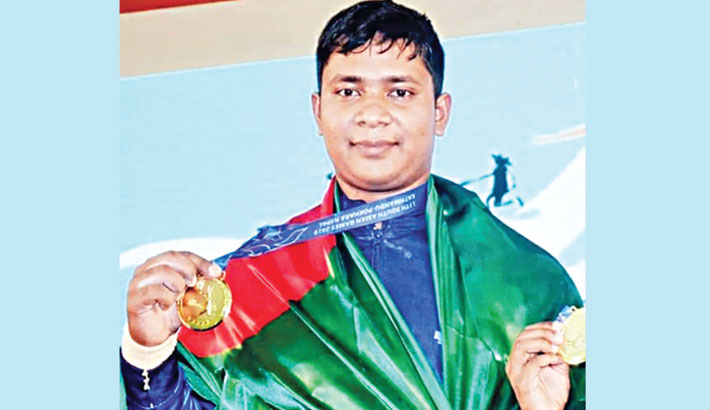 National weightlifter Ziarul Islam admitted that they are far behind compared to their foreign competitors in terms of facilities and it made them fail incessantly during the international meets.

Ziarul, who recently broke the national record in the men’s 102kg event by lifting a total of 262kg during the Bangabandhu Bangladesh Games and won the gold medal as well, lifted 264kg (123kg snatch + 141kg clean and jerk) in Asian Weightlifting Championship in Uzbekistan last month.

Despite his career-best performance, Ziarul failed to make an impact during the meet as he finished last (ninth out of nine competitors) in the event.

“We are far behind our international competitors. I saw them get better training facilities, food diets and gym equipment that made them technically sound and improved their performance. If I have uninterrupted training, the best gym equipment and proper nutrition, I can also get a good result,” the Bangladesh Army weightlifter told The Daily Sun on Tuesday.

Ziarul also blamed lack of time for preparation behind his finishing last in the Asian meet and urged for foreign training before taking part in crucial international events.

“I couldn’t take good preparations for Asian Championship. After the Covid-19 break, I took part in the Inter-service and then concentrated on Bangladesh Games where I bagged gold,” he said.

“The competition (Asian meet) provided quotas for the upcoming Olympics. We needed training abroad before taking part in these important meets,” Ziarul, who earned a gold medal in the last edition of SA Games in Nepal, added.

Another weightlifter Monira Kazi, who earned a gold medal in Bangladesh Games, also finished last (eighth) in the women’s 81kg event after lifting a total of (65kg snatch + 90kg clean and jerk) 155kg in the same meet.

Although the meet ended on April 25, both the weightlifters could only return home on May 2 after the Bangladesh government lifted bans on some international flights on May 1.