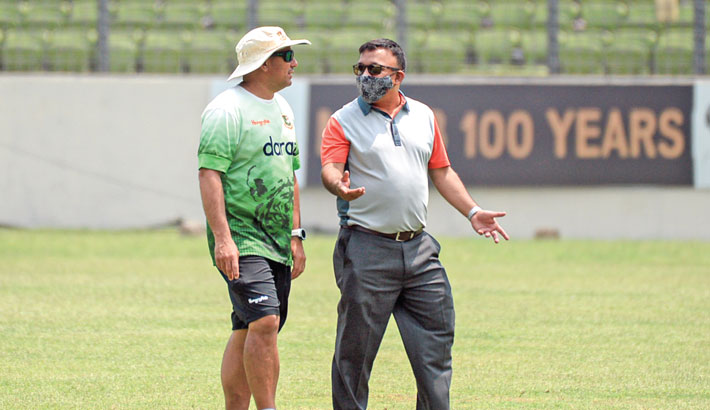 Former Bangladesh skipper Khaled Mahmud insisted that it won’t be wise to make head coach Russell Domingo a scapegoat for the failure of the national team.

Mahmud, the current Bangladesh Cricket Board director, was made the head of the delegation of the national cricket team during their recent Sri Lanka tour for the two-match Test series.

BCB had several reasons to make Mahmud the team leader for the series and one of the major reasons behind this appointment was to see how Domingo performs inside the dressing room considering BCB high-ups were not impressed with him due to his continuous failure to lead the side successfully.

Mahmud had performed various roles in Bangladesh cricket over the years but he returned to the national set-up after a while and this time his job was more complicated than the previous times.

“We should not make Russell a ‘scapegoat’. I saw him try. We should not make the coach fully responsible for any good and bad. He was also a coach of a big team. There was no blunder in his effort, perhaps he was unlucky. It happens many times. It is too early to say anything now. I just worked with him in a series. He is trying,” said Mahmud, adding that the only thing that he needs to improve is his communication skill.

“We need to explain to boys about our planning and later we have to tell them constantly what needs to be done and Domingo needs to understand it because he is not working in South Africa rather in Bangladesh where things work differently.

“I've tried to convey this message and I've talked about it. It takes time to build a relationship. But I have tried to explain what I know about Bangladesh cricket,” he added.

Mahmud poured cold water on the speculation that Domingo tenure is expected to be cut short by BCB due to his performance adding that it is not something they are thinking at the moment.

“I don’t think there is any such discussion (sacking Domingo). We have to understand that coaches are not solely responsible for failure or success because eventually, the cricketers have to play,” said Mahmud.

“One thing we must understand is that no point in blaming the coach alone rather we have to understand and implement a plan so that we can take the game forward,” he said, adding that the practice session needs to be remodelled for the Test squad.

“I'm looking at the long format. We have to remodel our practice, other things and have to figure out the coach's plan.

“Coaches work hard and you cannot argue that they try hard. I think that the preparation of the Test team is important. Our fast bowlers don’t have the habit of bowling for so long. They have to develop it through first-class cricket and practice,” he said.

“I think the Test team members need to practice from morning till evening like the way they play Test like say they bowl 10:00am to 12:00pm and then we bowled again after lunch and finally bowled with the new ball.

“It is very important to develop this habit. I think it is better to do work with the Test team in this way; especially with them who will play in future,” he concluded.