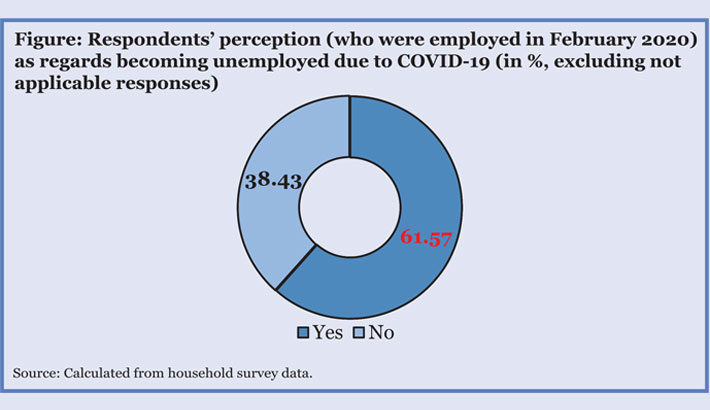 The study: ‘Income and Employment in Covid Times: How the People are Coping - Findings from a Household Survey’ jointly conducted by CPD and Oxfam, Bangladesh was published through a virtual dialogue on Wednesday.

It was prepared based on a survey conducted in late January and early February from 2,600 households equally selected from rural and urban areas, informed Towfiqul Islam Khan, senior research fellow of CPD, while presenting the study highlights.

CPD’s Chairman Prof Rehman Sobhan said: “Effectively delivering government interventions, in cash or in-kind, needs to be developed in view of the impact on employment and income.”

Citing that the COVID-19 pandemic and its impacts are still unfolding, CPD suggested monitoring the impacts of attendant developments on the labour market scenario on a continuous basis.

For this to happen, investment in infrastructure, strengthening of labour market institutions, emphasis on skill development and reforms in doing business are key to attracting private investment from both domestic and foreign sources, CPD says.

Despite the full recovery of jobs before the second wave of the Covid-19, average working hours of the people were reduced by 4 percent which decreased their wage earnings.

On average, about 45 percent of households had a lower income compared to the pre-Covid-19 period.

Average income was reduced by 12 percent compared to the pre-covid-19 time while people engaged in agriculture, forestry and fishing faced a loss of 16.50 percent of their previous income.

Income for people in the manufacturing sector was reduced by 13 percent wholesale, retail trade, motor and vehicle repairing sectors by 14 percent and about 9 percent in both construction, transportation and storage sectors.

The study said about 40 percent of the employed people had their employment situation worse than the pre-Covid-19 period while only 8 percent reported better situations.

About 86 percent of individuals are not earning enough to meet their daily necessities and about 78 percent of the households had reduced expenditure to cope with the impact, while 52 percent changed dietary patterns involuntarily.

About half of households experienced a decline in savings and more than half of the households had to resort to borrowings. The average loan size of the households doubled in the last year. Support from the government was limited and only 20 percent of the households could receive some form of government support, revealed the report. CPD’s Distinguished Fellow Dr Debapriya Bhattacharya and Professor Mustafizur Rahman, Tapan Chowdhury, former advisor to the Caretaker Government and managing director of Square Pharmaceutical, Shahidullah Azim, vice president of the BGMEA, Dr Fahmida Khatun, executive director of the CPD, Dr Dipankar Datta, country director of Oxfam, Bangladesh were connected to the event.