Coronavirus and History of Pandemic 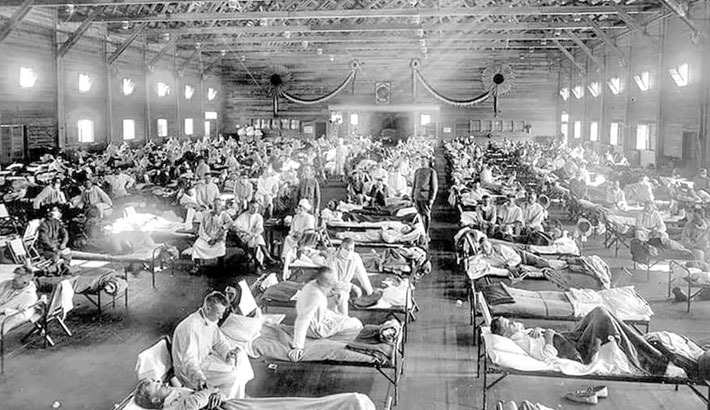 Hospital during Pandemic in 1918

Pandemic is a global outbreak of a disease. The definition of pandemic is the rapid spread of disease across a particular region or regions. Diseases are often epidemics, which sometimes become pandemics. As for example, HIV was considered an epidemic in West Africa for decades before becoming a pandemic in the late 20th Century.

The most deadly pandemic in history was the Spanish Flu of 1918. The virus infected an estimated one-third of the world’s population and was responsible for causing deaths between 20 and 50 million people.

For roughly 2.5 million years, humans lived on earth without leaving a written record of their lives but other kinds of remains such as art effects give us information about them. The period from 2.5 million years ago to 1,200 BC is generally categorized in three archaeological periods: the Stone Age, Bronze Age and Iron Age.

This division was based upon the type of tools humans used. There was a transformation from a culture of hunting and gathering to farming and food production. The Paleolithic period was roughly 2.5 million years ago to 10,000 BC. The Mesolithic period was about 10,000 BC to 8,000 BC and the Neolithic period about 8,000 BC to 3,000 BC. The Bronze Age was from about 3,000 to 1,300 BC and Iron Age from about 1,300 to 900 BC. During these three periods agriculture, art and religion all became more sophisticated and writing systems and written documentations including alphabets began to emerge, assuring in the early historical period.

Plague was one of history’s deadly diseases—then we found a cure. Known as the Black Death, the much-feared disease spread quickly for centuries, killing millions; the bacterial infections still occur but can be treated with antibiotics.

Yersinia pestis is the bacterium responsible for causing plague. This bacterium disables the immune system. Many small mammals act as hosts to the bacteria, including rats, mice, chipmunks, prairie dogs, rabbits and squirrels. Fleas that live on rats and other small animals jump to a new host when the previous host dies and come often to humans.

Bubonic plague refers to telltale buboes—painfully swollen lymph nodes—that appear around the groin,armpit, or neck. The skin sores become black, leading to its nickname during pandemics as “Black Death”. Initial symptoms of this early stage include vomiting, nausea, and fever.

Pneumonic plague is the most infectious type, which moves into the lungs. During this stage, the diseases pass directly person-to-person through airborne particles coughed from an infected person’s lungs. If untreated, Bubonic and Pneumonic plague can progress to septicemia plague, infecting the blood stream. Pneumonic and Septicemic plague kills almost 100% of those it infects.

Three especially well known pandemics occurred before the cause of plague was discovered. The Plague of Justinian began in 542 AD and killed up to 10,000 people a day in Constantinople (modern-day Istanbul, Turkey). Modern estimates indicate that half of Europe’s population—almost 100 million deaths—were raced out before the plague subsided in the 700s. The most infamous plague outbreak was called the “Black Death”, a multi-century pandemic that wiped through Asia and Europe. It was believed to start in China in 1334, spreading along trade routes and reaching Europe via Sicilian ports in the late 1340s. The plague killed an estimated 25 million people, almost a third of the continent’s population.

The most recent global outbreak started in China in 1860 and didn’t officially end until 1959. This pandemic caused roughly 10 million deaths. From the teeth of these plague victims; scientists discovered that the strain from the Justinian plague was related to, but distinct from other strains of the plague.

Most cases have appeared in Africa since the 1990s. Between 2004 and 2014, the Democratic Republic of Congo reported the majority of plague cases worldwide with 4,630 cases and 349 deaths. Scientists link the prevalence of plague in DRC to the ecosystem—primarily mountain tropical climate. In 2017, in Madagascar, more than 2,300 cases were reported. The US, China, India, Vietnam and Mongolia are among other countries that have had confirmed human plague cases in recent years. The US average is seven human cases of plague each year, emerging primarily in California and the Southwest. Today, most people survive plague with rapid diagnosis and antibiotic treatment. Good sanitation practices and pest control minimize contact with infected fleas and rodents to help prevent plague pandemics.

Many diseases got from Europe to the Americas. For example, Christopher Columbus and his crew brought smallpox to the Taino people of Hispanola. The Europeans have developed some immunity and knew how to treat the disease. However, the Taino people of Hisponola had no immunity or similar knowledge and within 50 years, their population of perhaps 8 million became virtually extinct.

Epidemic diseases led to a general decline in the Amerindian population. This led to increaseddependence on Europeans and reduced capacity to resist their invasion.The African slave trade introduced malaria, which the indigenous population of America had no protection against malaria.

“Mayflower” was a popular name for many ships. One such ship carried pilgrims to what is today the USA and a disease was transmitted through the passengers to other resettled families.In 1820, Cholera became epidemic in India. Cholera killed millions of people. Later, cholera spread in many other countries around the world. There was an outbreak of this disease till 1824. At the same time, Russia and Persia also fell victim to a terrible epidemic. Two hundred thousand people died. The world at that time didn't get any antidote to prevent Cholera.

Between 1817 and 1821, there were five outbreaks of Cholera in India. In the same century, 45,000 people died in the Yellow Fever epidemic in Philadelphia, USA. The disease caused severe pain all over the body, including high temperature, which led to horrible deaths due to excessive bleeding. One type of mosquito was the carrier of the disease.

The latest outbreak of the Coronavirus pandemic in 2020 is known as Covid-19. This is probably the first time in history that a deadly virus has been transmitted all over the world.  This Coronavirus originated from Wuhan, China. The idea is that it is not a natural virus. More than 216 countries around the world are currently infected with this disease and millions of people are being infected everyday. By this time, more than three million people have died from this disease.

A number of countries and world-renowned research institutes  have developed vaccines that are now being used. Although a few number of vaccinated people are infected by the Coronavirus, the percentage is too low.

It is a fact that the Coronavirus is still infecting millions of people almost every day while the number of deaths is still increasing. In-depth research is underway by the world famous researchers and institutions to develop the most appropriate vaccines while the whole world is waiting to see such successful vaccines, which can make the world free from Corona viruses. Hope, we will get it soon.

The writer is a student of History at Dhaka University