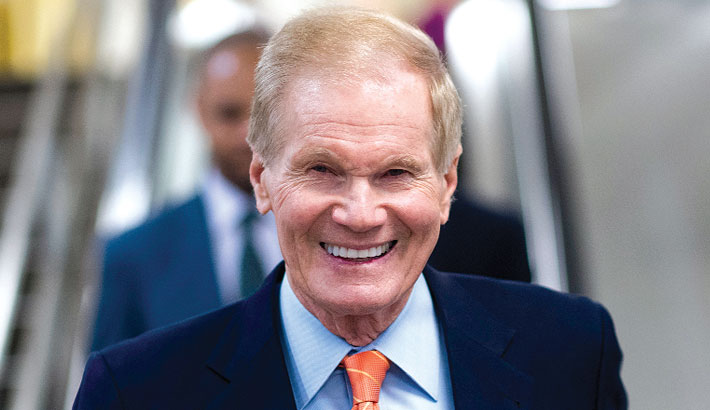 Former Florida senator Bill Nelson was sworn in Monday as head of NASA, hailing a “new day” for space exploration as the United States seeks to return to the Moon, reports AFP.

With his hand on a Bible, Nelson took the oath of office from Vice President Kamala Harris as he officially took up the role of NASA administrator.

“It’s a new day in space,” he said, after bringing a Moon rock to the event. Nelson, 78, who traveled into space in 1986, takes over the agency with the United States hoping to put astronauts back on the Moon by 2024. Humans last set foot on the Moon in 1972 during the Apollo program.

Under the Artemis program, NASA wants to establish a sustainable presence, complete with a lunar space station, to test new technologies that would pave the way for a crewed mission to Mars.

In 2019, then vice president Mike Pence challenged NASA to land the first woman and the next man on the Moon by 2024, and President Joe Biden’s government has backed the same timetable.

Nelson said their presence was “to show the continuity and the bipartisanship, with which you run the nation’s space program, particularly NASA.”

In 1986, Nelson, a sitting lawmaker, was a crew member on the Space Shuttle Columbia during a six-day mission in space, and has since sat on many congressional committees on space and science.

“NASA is critical to US national and economic security,” Harris said on Twitter.

“With decades of experience and as a former astronaut, Bill Nelson will advance NASA’s science, aviation, and technology missions as Administrator.”