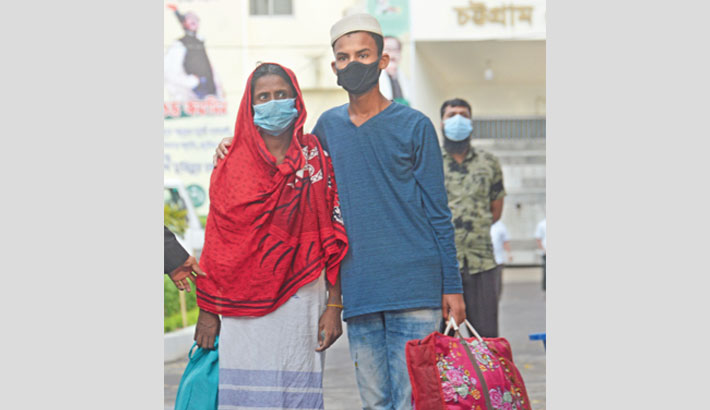 Hasina Begum, who was wrongly imprisoned for around 15 months for the similarity of her name to real convict Hasina Akter, is released from jail on Tuesday. — sun photo

CHATTOGRAM: A woman, who was wrongly imprisoned for around 15 months for the similarity of her name to the real convict, has finally been released from jail.

Hasina Begum, hailing from Teknaf upazila in Cox’s Bazar district, had been languishing in jail instead of convict Hasina Akter after police arrested her wrongly in a case filed in connection with the recovery of Yaba tablets.

Though names of both women’s husbands are also same, there are differences in other information.

convict Hasina Akter is the wife of Hamid Hossain of Ismail Hazi Bari of the same upazila.

Police arrested the innocent woman mistakenly after a court delivered verdict in the case in 2019.

The court order came after Chattogram Central Jail authorities submitted a report before the court confirming that Hasina Begum is not the real convict, he said.

The court ordered her release after going through the reports from the jail authorities and police, and also asked for arresting the real convict, Murad said.

Sources said police arrested Hasina Akter and her husband Hamid Hossain with 2,000 Yaba pills from Moijjartek in Karnaphuli upazila of Chattogram on February 24, 2017 and a case was filed in this connection.

The couple secured bail from the court on November 27 of the same year and went into hiding.

Later, police arrested Hasina Begum on December 16 of the same year. She had been in jail since then.

After the woman’s arrest, her husband Hamid left the locality and their two daughters are living at the residence of maternal grandmother. Their only son Shamim Newaj works at a residence in the port city.

Murad came to know about the matter from the victim’s son. The family also filed an appeal in this regard earlier.

The lawyer said he submitted another petition to the court on March 22 and the court ordered police and jail authorities to submit reports in this regard.

The next course of action will be taken after getting a copy of the verdict, he added.