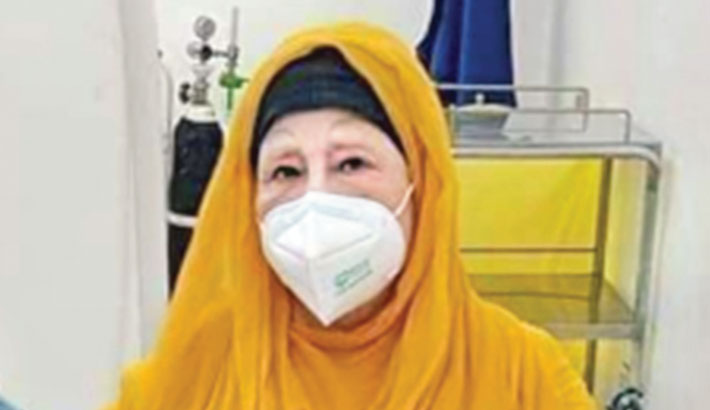 The family of Bangladesh Nationalist Party (BNP) Chairperson Khaleda Zia, who has been undergoing treatment at a hospital in the capital with Covid-19, is taking all necessary preparations to take her abroad for better treatment.

It will submit an application to the authorities concerned anytime soon seeking permission to take her abroad for advanced treatment, the family sources said.

Asked about the matter, BNP Secretary General Mirza Fakhrul Islam Alamgir told the Daily Sun on Tuesday evening that they have not yet submitted any

application seeking government’s permission to take the BNP chief abroad. “I also don’t know whether her family will apply in this regard.”

Earlier, speaking at a virtual discussion arranged by Jatiyatabadi Sramik Dal, Fakhrul said, “Khaleda Zia’s condition is now stable. Physicians are hopeful that she will recover through treatment.”

Talking to the Daily Sun, Khaleda’s personal physician Mohammad Al Mamun said, “The medical board formed for her (Khaleda’s) treatment will decide about her further treatment -- be it home or abroad -- after reviewing her medical test reports.”

Khaleda’s family wants to take her abroad for advanced treatment and they are now trying to get the government’s permission in this regard, said family members and sources inside BNP.

The family members may submit an application to the government this week as they want to take the BNP chief to Singapore first and then London, the sources said.

A BNP leader, wishing not to be named, said Khaleda’s family has also booked an air ambulance to take her abroad whenever they get permission from the government.

The BNP chairperson, who has been undergoing treatment at Evercare Hospital Dhaka with coronavirus infection, was shifted to coronary care unit (CCU) of the hospital on Monday with breathing problem.

Later, Fakhrul discussed her condition with the home minister.

The BNP chief, who tested positive for Covid-19 on April 11, was admitted to Evercare Hospital on April 28 for some tests as part of her follow-up medical check-up under cardiologist Shahabuddin Talukdar.

On the same day, a 10-member medical board, headed by Prof Shahabuddin Talukder, was formed for her treatment.

Khaleda was first diagnosed with Covid-19 on April 11 and she again returned a positive test on April 24.

On April 15, she was taken to Evercare Hospital for a CT scan and the report of the test showed a very nominal lung infection.

Khaleda is suffering from severe and uncontrolled rheumatoid arthritis, diabetes mellitus, hypertension, cough-variant asthma and an autoimmune disorder that damages moisture-producing glands making it difficult to produce saliva and tears, with a need for bilateral knee replacement, family sources said.

Amid the coronavirus outbreak, the government on March 25 last year freed Khaleda from jail for six months through an executive order suspending her jail sentences in two graft cases. The government later extended the suspension of the jail sentences twice.

On February 8, 2018, the BNP chief was sent to jail after a court sentenced her to five years' imprisonment in the Zia Orphanage Trust corruption case. The High Court later doubled her sentence.