Can Mahmudullah make a Test comeback? 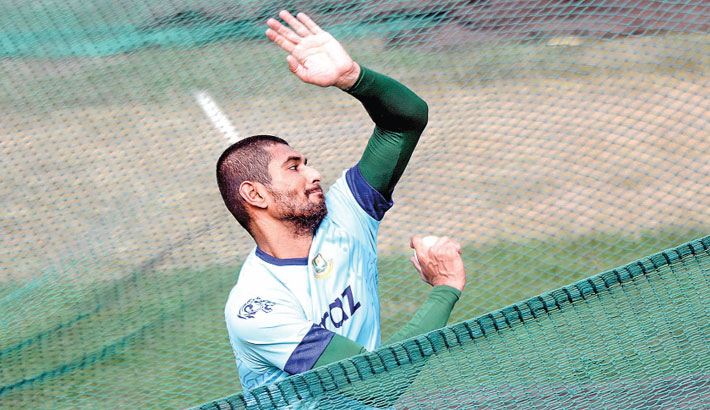 Bangladesh T20 captain Mahmudullah Riyad is seen bowling during a training session at the Sher-e-Bangla National Cricket Stadium in the capital on Tuesday. — TANVIN TAMIM

Bangladesh heaved a sigh of relief as Mahmudullah Riyad began bowling in the national nets after recovering from his back injury ahead of the upcoming three-match ODI series against Sri Lanka.

Mahmudullah received a back injury during the last ODI against West Indies and it forced him from making him unavailable as a bowling option during the just-concluded tour of New Zealand. Bangladesh national selector Habibul Bashar told The Daily Sun that is good news that Mahmudullah is bowling again as he feels he is someone with a golden arm.

“He (Mahmudullah) had some kind of injury but now he has recovered and started bowling and that is very good news as we can have another added option for an all-rounder in the team,” Habibul said.

“Mahmudullah is someone who has an uncanny knack of picking wickets at crucial times and what I feel is that he is someone who can bowl more than a couple of overs unlike part-timers,” he added.

Mahmudullah started his career as a bowler and then converted into a batsman who could bowl handy off-breaks but his inability to bowl due to injury in the recent past raised quite a few eyebrows considering team management always prefers to have someone down the order with an ability to bowl a couple of overs.

Mahmudullah looked determined to prepare and make him available as a bowling option and started bowling in full rhythm in the nets with fellow members of the 21-member ODI’s squad from the opening day of the training session that started on May 2.

The training session is part of the preparation for the upcoming three-match series against Sri Lanka, scheduled from May 23. Mahmudullah said that he is not feeling any pain while bowling. “I am doing fine (there is no pain) Alhamdulillah,” said Mahmudullah when his attention was drawn regarding the back pain while returning back to the dressing room after completing his half-an-hour bowling session.

Coach Mizanur Rahman, who is in-charge of the camp due to the absence of Russell Domingo as he is fulfilling his responsibility with the Test squad, said that he was quite impressed with the way Mahmudullah bowled in the nets.

“Mahmudullah is not uncomfortable at all with his bowling and he is enjoying it. He is bowling in a good channel and looked quite sharp to be honest,” said Mizanur.

“We are all aware that with time he had turned into a batsman who can bowl off-spin but honestly speaking I feel he is a much better bowler than how we rate him,” he said.

Mahmudullah’s Test career came to a halt for the time being as the team management has asked him to re-think his future in longer-version cricket, shortly after the opening Test against Pakistan.

Mahmudullah’s name for a Test comeback cropped up after the opening Test against West Indies at home in January when Shakib Al Hasan was ruled out for the second Test due to picking up an injury but he failed to seize the opportunity due to his injury.

“I want Mahmudullah to play in the Test but he needs to bowl (against West Indies) but I came to know that he is having an injury and cannot bowl,” BCB president Nazmul Hasan told media at that point of time.

Bangladesh included Shuvagato Hom in the 21-member squad that travelled to Sri Lanka after a gap of five years and though he failed to make a cut in the Test squad one of the basic criteria of his inclusion was that he can bowl a few overs and bat down the order, a thing Mahmudullah was doing in Test for years before being dumped in wilderness.

Many feel that if he is bowling in full rhythm again a chance of returning to red-ball cricket is higher than just being a lower-order batsman though he has got four centuries on his name in his 49-Test career.