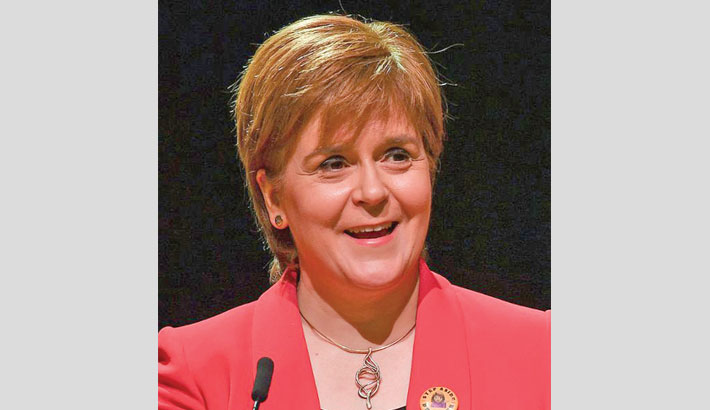 EDINBURGH: Scottish National Party (SNP) leader Nicola Sturgeon goes into elections Thursday hoping victory will set the nation on the road to independence, but will have to overcome infighting and opposition in London, reports AFP.

The 50-year-old has become the pre-eminent force in Scottish politics, earning a reputation for assured leadership since becoming first minister in the country’s devolved government in 2014.

She has earned points among voters for her management of the coronavirus pandemic. Her clear communication style is cast by her supporters in contrast to mixed messages emanating from UK Prime Minister Boris Johnson during the health crisis.

But what should have been a smooth build-up to the elections has been overshadowed by months of mudslinging between Sturgeon and Alex Salmond, her former mentor and predecessor as first minister.

The spectacular falling out between the pair over the handling of sexual harassment claims against Salmond has seen Sturgeon facing questions over her judgement and her reputation for attention to detail.

Disagreements between the two political heavyweights reverberated into the election campaign and threatened to split the independence movement, with Salmond forming his own pro-independence party called Alba.

Sturgeon’s SNP looks set to dominate at the ballot box, with one Ipsos MORI poll showing it on course to win 70 of the 129 seats in the Scottish Parliament.

But questions remain over whether Scots will back independence in a referendum after all the infighting, with a string of surveys showing waning popular support for breaking away from the UK.

Nevertheless, Sturgeon said at the launch of her manifesto earlier in April that Johnson would have no “moral justification” to prevent a second vote on independence if the SNP emerges on top on Thursday.

The UK prime minister must approve the referendum, and has routinely ruled out a second one after Scottish voters rejected independence in 2014.

For Sturgeon and the SNP, Britain’s vote in 2016 to quit the European Union has changed the picture entirely. A majority of Scots wanted to stay in the EU.

A former lawyer labelled “Queen of Scots” by some in the media, Sturgeon argues for socially conscious policies she says were abandoned by the centre-left Labour party, once the dominant force in Scottish politics.

She was born in the industrial town of Irvine, southwest of Glasgow, in 1970 to an electrician father and a mother who remains active in local SNP politics.

She studied law at Glasgow University and stood unsuccessfully for the House of Commons in 1992, aged just 21, before starting her career as a lawyer.

When the Scottish Parliament was created in 1999, with Labour ahead of the SNP as the biggest party, Sturgeon was one of its first wave of lawmakers.

Her nickname at that stage was “nippy sweetie”—Scots slang for a pushy person.

Her mother Joan once joked about her daughter’s hard-working tendencies: “The phone is never switched off—many of my family can vouch for that.”

Sturgeon married SNP colleague Peter Murrell in 2010. The partnership has come under scrutiny after Murrell, the party’s chief executive, was also embroiled in the Salmond investigation.

Sturgeon played a pivotal role in the party’s campaign for the 2014 independence referendum. After 55 percent of Scots voted against, she took over as party leader and became Scotland’s first female first minister.

“With all of our assets and talents, Scotland should be a thriving and driving force within Europe,” she said in 2019.

“Instead we face being forced to the margins—sidelined within a UK that is, itself, increasingly sidelined on the international stage.”