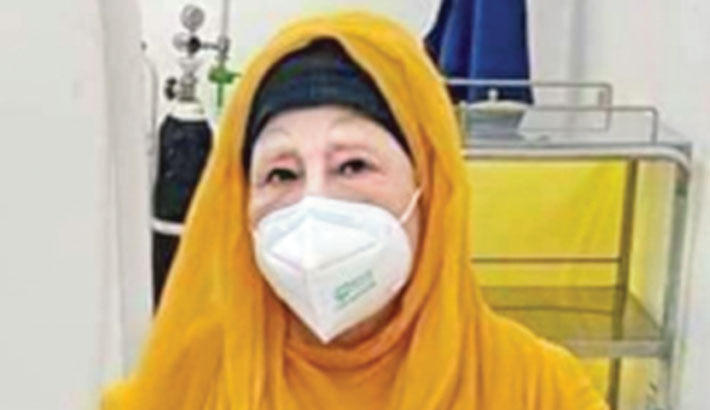 Bangladesh Nationalist Party (BNP) Chairperson Khaleda Zia, who was undergoing treatment at Evercare Hospital Dhaka with coronavirus infection, was shifted to coronary care unit (CCU) of the hospital on Monday with breathing problem.

She was moved to the CCU in the afternoon, said her personal physicians and party sources.

The BNP chief, who tested positive for Covid-19 on April 11, was admitted to Evercare Hospital on April 28 for some tests as part of her follow-up medical check-up under cardiologist Shahabuddin Talukdar.

Mentioning that it is taking time to carry out medical tests of the BNP chief, he said the medical board examines Khaleda almost every day and reviews the test reports. “It depends on her diagnosis reports when the BNP chairperson can return home from the hospital,” he said.

Khaleda was first diagnosed with Covid-19 on April 11 and she again returned a positive test on April 24.

On April 15, she was taken to Evercare Hospital for a CT scan and the report of the test showed a very nominal lung infection.

According to her family, Khaleda is suffering from severe and uncontrolled rheumatoid arthritis, diabetes mellitus, hypertension, cough-variant asthma and an autoimmune disorder that damages

moisture-producing glands making it difficult to produce saliva and tears, with a need for bilateral knee replacement.

Amid the coronavirus outbreak, the government on March 25 last year freed Khaleda from jail for six months through an executive order suspending her jail sentences in two graft cases. The government later extended the suspension of the jail sentences twice.

On February 8, 2018, the BNP chief was sent to jail after a court sentenced her to five years' imprisonment in the Zia Orphanage Trust corruption case. The High Court later doubled her sentence.