26 die as speedboat overturns in Padma

The accident occurs after the small vessel hits a bulkhead; probe body formed 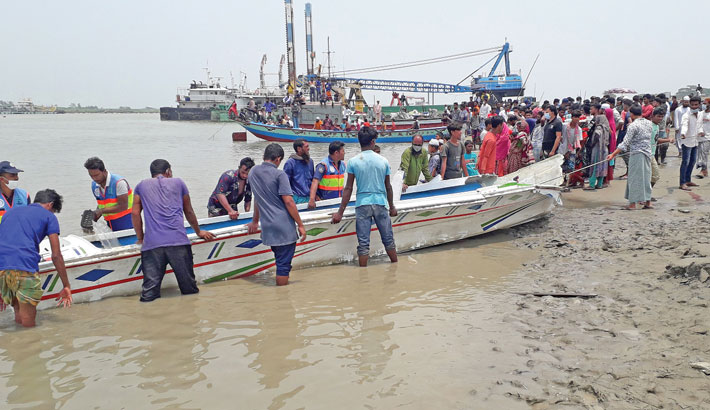 Twenty-six people die as a speedboat overturns in the Padma River after hitting a bulkhead near Banglabazar Ferry Ghat in Shibchar upazila of Madaripur on Monday. – SUN PHOTO

Twenty-six people died as a speedboat overturned after hitting a sand-laden bulkhead anchored in the Padma River near Banglabazar Ferry Ghat in Shibchar upazila of Madaripur on Monday.

Their bodies have been handed over to their relatives.

When the boat reached Kathalbari Puraton Ghat area after a while, it crashed into the bulkhead, which was anchored in the river. Under the impact of the collision, the speedboat turned turtle.

On information, district and naval police and divers from Fire Service and Civil Defence rushed in and they together with ferry ghat authorities and locals launched the rescue operation.

The bodies of 25 people were recovered from the river.

Six of the passengers were also rescued alive and they were later taken to Shibchar Health Complex where a woman died.

Aduri Begum, who was in the speedboat with her husband and child, fortunately survived the accident. She was taken to hospital with injuries.

Later, Aduri found her husband Arju and son Yamin among the dead at the Dotara Govt Primary School ground near Banglabazar Ghat.

Some of the survivors, including Aduri Begum, said the speedboat was running at a reckless speed since the beginning of their journey.

They alleged that the accident took place due to reckless speed and overcrowding as the speedboat was carrying additional passengers.

Like Aduri, many people were looking for the bodies of their relatives at the school ground the air of which got heavy with their mourning.

Officials of the local administration were giving information to the relatives after seeing the identity cards of the victims.

Services of public transport -- buses, trains and launches -- remained suspended amid the ongoing lockdown aimed at curbing the spread of coronavirus.

However, some unscrupulous drivers were running their speedboats on the river illegally to ferry passengers.

Deputy Commissioner of Madaripur Rahima Khatun said the speedboat was carrying passengers, violating the restrictions imposed by the government.

Asked why such an accident took place even after the operation of speedboat was suspended amid the lockdown, she said stern action will be taken in this regard.

The accident occurred due to poor visibility in the morning and as the driver was not skilled enough, the DC said.

Ghat authorities said the speedboat owner, Chandu Mia, has no registration while its driver Md Shah Alam has no licence.

Miraj Hossain, officer-in-charge of Shibchar Police Station, said the speedboat driver suffered serious head injuries in the accident and he was being treated at Bangabandhu Medical College Hospital in Faridpur under police custody. “There’re bandages all over his head. He can’t say anything.”

Inspector (Investigation) of the police station Mohammad Amir Hossain said they have already handed over the bodies of the victims to their family members.

Financial assistance of Tk 20,000 was announced for the families of each victim.

The committee was asked to submit its report within three working days.

Speedboats have become a popular mode of transportation on the Padma River, which take only 15 minutes to cross the river.